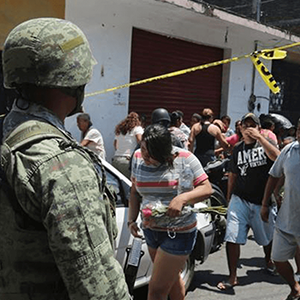 Paraphrasing the Greek dramatist Aeschylus, in war, terrorism and crime, truth is the first casualty. While a proper accounting of the human toll of organized violence is critical to achieving justice and stability, it is a tricky endeavor. Part of the problem is that there are few people or institutions actually keeping track of the dead. In some of the most conflict-, terrorist- and crime-prone countries and cities, there may be no data collection systems in place at all.

It is difficult, then, to appreciate the full scale of violent deaths around the world, much less in cities. According toone estimate ,[1]  at least 99,000 people died violently in armed conflicts in 2016 (the most recent year for which data is available), a significant decline from the estimated 143,000 people killed in 2014. This compares [2] to an estimated 34,000 deaths terrorist-related killings in 2016 [3] in contrast to over 43,000 in 2014.[4] Notwithstanding debates over what counts as a conflict- or terrorist-related death, the biggest killer of all is intentionally homicide: 385,000 victims in 2016, slightly higher than the 375,000 murders in 2014 .[5]

Most forms of contemporary organized violence are concentrating in urban areas. The reason is obvious: the world is undergoing a process of hyper-urbanization. In the 1950s, less than 30% of the world lived in a city: today, the proportion is over 55%. More than 68% by 2050 ,[6] at least 416 new million urban dwellers in India, 255 million in China and another 189 million in Nigeria. Meanwhile, the rural population is reaching its peak and will contract over the coming decades. It is not just people migrating to cities — warfare is moving into urban spaces  as well.[7]

Killings arising during armed conflicts, terrorist acts and violent crimes are not evenly distributed among the world´s cities. Rather, they tend to be hyper-concentrated in specific geographic areas. In the case of warfare and terrorism, they are overwhelmingly concentrated in cities of the Middle East, North Africa [8] and Central and South Asia. Although homicidal violence is more widespread, it is clustered in large and medium-sized cities across Latin America ,[9] the Caribbean parts of southern and central Africa. Not surprisingly, the chances of being killed in Damascus, Kabul or San Salvador are literally hundreds of times higher than New York, Oslo or Tokyo.

Twenty-first century urban warfare can be highly destructive, as the cases of Aleppo, Kunduz. Mosul and Sana’a illustrate. The fact that war and terrorism is increasingly concentrated in urban settings of the Middle East, North Africa and Central Asia is not lost on militaries [10] and humanitarian agencies [11] around the world. And for good reason: armed conflicts in Afghanistan, Iraq, Syria, and Yemen accounted for two thirds of all reported violent conflict deaths over the past decade, most of them occurring in large and medium-sized cities. Urban populations in cities across Somalia and South Sudan are also routinely subjected to airstrikes, artillery and small arms fire.

Urban warfare is hardly new. Nor is it confined to mega-cities in the Middle East, North Africa or Central and South Asia. Throughout the Middle Ages hundreds of large, medium and small cities [12] around the world experienced armed conflicts of varying intensity, including siege warfare. During the nineteenth and twentieth centuries,[13] cities were targets of aerial bombing, from nuclear bombs and chemical weapons to precision-guided cruise missiles and drone strikes. Some cities collapsed entirely in the wake of devastating attacks, while others bounced back [14] with remarkable speed. While generating untold misery, urban warfare was largely neglected [15] by military historians and theorists until comparatively recently.

Warfare is urbanizing because the planet is urbanizing. Most of the world´s cities are coastal and increasingly inter-linked through global supply chains and digital communications systems. These characteristics — some old and others new — are shaping the strategies of armies  [16] and guerrilla and militia groups .[17] Some military theorists are predicting that [18] future wars will be waged in coastal and connected cities, requiring shifts in doctrine and tactics. While western militaries have traditionally been reluctant to get involved [19] in the messy business of city fighting, the central importance of cities in the functioning of nation states and global capital and commodity flows means that “multi-spectrum” urban engagements are unavoidable .[20]

Contemporary urban warfare comes in many shapes and sizes. Depending on whether it occurs in Donetsk, Grozny, Monrovia, or Raqqa, urban conflicts range from full-scale assaults on critical infrastructure to pitched street-battles between factions. The largest urban conflict since the Second World War occurred in Mosul  in 2016,[21] a city of 1.2 million civilians. It was epic in scale, involving over 100,000 Iraqi-led coalition troops against between 3,000 and 5,000 ISIS fighters. Cities are sponges that soak up troops. They are not easily pacified through aerial precision attacks alone. Armies must contend with a complex maze of built-up areas and subterranean defense systems.

In spite of international norms regulating the use of force and protection of civilians, the urbanization of warfare has vast implications for population wellbeing. Take the case of population displacement. During a single battle in Fallujah [22] between November and December 2014, the US launched 540 airstrikes, expended 14,000 artillery and mortar shells used 300 per cent more rounds than anticipated. Anywhere between 60,000 and 80,000 [23] of the city´s roughly one million residents fled. Civilians who can afford to flee do so, while those who cannot seek sanctuary in cities. The UN claims [24] that roughly 75 per cent of today´s 65 million refugees and internally displaced people live in cities. The proportion may be higher still in some countries: estimated 90% of Syrian refugees live in cities ,[25] as opposed to organized camps or rural areas.

Urban warfare is deadly for combatants and civilians alike. This is because military operations in cities typically entail close-range combat, involve the use of explosive weaponry [26] and encounter obstacles when it comes to evacuating wounded soldiers. Due in part to the dense population of cities and the periodic (and illegal) targeting of hospitals and schools ,[27] urban warfare often results in comparatively high civilian casualties, especially among women and children .[28] Recent studies of conflict deaths in Iraq and Syria [29] between 2014 and 2017 found that over 70 per cent of all killings occurred in cities. Moreover, civilian deaths increased five-fold [30] when offensives occurred in urban areas.

Generating a comparative global assessment of conflict deaths in cities is exceedingly difficult. One of the biggest challenges is logistical [31] — how to count the dead? National and municipal vital registration systems routinely collapse during armed conflicts. Instead, researchers rely on periodic household surveys (called verbal autopsies), human rights organizations and media outlets. What they often find is that the violent death count is just the tip of the mortality iceberg. Wars also result in massive numbers of non-violent deaths, or so-called excess mortality ,[32] due to starvation, illness and disease. These excess deaths can be an order of magnitude higher than the number of civilians killed immediately by bullets, rockets and mines.

These logistical challenges explain why there are so few estimates of violent casualties arising from armed conflicts, including cities. Take the case of the Uppsala Conflict Database Program (UCDP)[33] that records conflict deaths by counting incidents reported in the public domain (Table 1). After adjusting the absolute numbers of conflict deaths relative to the total population per country, they established national prevalence rates per 100,000 people between 2010 and 2016. While in some war-affected countries the rates are high, the overall conflict death rates in conflict zones are far lower than expected. For example, the average conflict death rate is sky-high in Syria but comparatively lower in places like Afghanistan, Iraq, Libya, South Sudan, Chad and Yemen. A separate effort to measure conflict deaths in cities comes from the Peace Research Institute in Oslo (PRIO). PRIO generated a dataset on the number of “conflict events” resulting in death in capitals and other major cities from 1960-2014. While based on a comparatively small sample of lethal events, the so-called Urban Social Disorder Database  [34](Table 2) provides a very conservative estimate of killings arising during various types of warfare and social unrest from over 89 countries. While some war-affected cities like Mogadishu, Baghdad, Kabul and Sana’a register comparatively high prevalence of killing (per 100,000), most cities exhibit still comparatively low conflict death rates when compared to, say, equivalent rates for terrorism and homicide.

Not surprisingly, micro-level data collected by national data collection observatories such as the Syria Network for Human Rights or Iraq Body Count suggest that Uppsala and PRIO are dramatically under-counting conflict deaths. For example, monthly reports  [35] released by the Syria Network for Human Rights [36] estimate that 2,019 civilians were killed in Damascus and its suburbs and another 1,512 in Raqqa in 2017 alone. Meanwhile, Iraq Body Count [37] estimates that at least 300 civilians were killed by conflict-related violence in Baghdad, 125 in Kirkuk, 90 in Anbar in 2017. Unfortunately, few comparable entities exist in other war zones such as Afghanistan, South Sudan or Yemen. Another form of organized violence affecting city residents in war zones (and outside of them) is terrorism. Estimating the numbers of people killed due to terrorism, like casualties of armed conflict, is fraught with difficulties. One reason is that there is no universal definition of terrorism nor agreement on what constitutes a terrorist act or who is a terrorist. What counts as terrorism is intensely political: governments and non-government bodies routinely attribute deaths in war zones to either (or both) terrorism or armed conflict.

As in the case of conflict-related deaths, the vast majority of terrorist-related killings [38] over the past decade are concentrated in the Middle East and North Africa and Central and South Asia. Many of these countries are not just war-affected, but also suffer high levels of terrorism owing to weak security institutions. A review of more than 2,100 of the world’s most populous cities underlined how terrorism is highly concentrated. In 2016, cities across Iraq, Syria, Somalia and Afghanistan featured among the most violent (Table 3).[39] Taking a longer view, from 2010 to 2016, the list expands slightly to include cities from Nigeria and Pakistan (Table 4).[40] Perhaps most surprising is the fact that urban residents around the world are much more at risk of being killed as result of intentional homicide than either terrorist violence or warfare. Drawing on the Homicide Monitor, [41] it is possible to track murder rates for more than 225 countries and territories from 2010 to 2017 (Table 5)[42]; in addition, the top 25 cities for homicide for 2016 or 2017 (latest year available) are depicted (Table 6)[43]. Although homicidal violence is steadily declining  [42] in most parts of the world, it still presents a real threat to urban dwellers in Latin America, the Caribbean and Southern and Central Africa. Indeed, 46 of the 50 most violent cities [44] are concentrated in the Americas. This is not to trivialize the real dangers and destruction associated with urban warfare and terrorism, but rather to put them in perspective. Developing a standard methodology for documenting and tracking the organized violence (e.g. deaths, injuries, and related violence, including rape, sexual assaults, and displacement) generated by armed conflicts in cities is essential to understanding the wider dynamics of urban warfare and urban terrorism. This essay offers a preliminary attempt to start the process, while also signaling critical knowledge gaps.

[2] Global Terrorism Database (GTD), University of Maryland, National Consortium for the Study of Terrorism and Response to Terrorism (START); https://www.start.umd.edu/gtd/ .

[11] Peter Maurer, “War in Cities: What is at Stake?” Geneva: International Committee of the Red Cross (ICRC);https://www.icrc.org/en/document/war-cities-what-stake-0 .

[26] Michael Talhami and Mark Zeitoun, “The impact of explosive weapons on urban services: Direct and reverberating effects across space and time.” International Review of the Red Cross (IRRC), No. 901, 11 April 2017;https://www.icrc.org/en/international-review/article/impact-explosive-weapons-urban-services-direct-and-reverberating .

[30] I saw my city die: A special report of the International Committee of the Red Cross. Geneva; ICRC, n.d.;http://redcross.michiko.design .

[38] Dave Mosher and Skye Gould, “How likely are foreign terrorists to kill Americans? The odds may surprise you.” Business Insider UK, 1 February 2017; http://uk.businessinsider.com/death-risk-statistics-terrorism-disease-accidents-2017-1?r=US&IR=T .