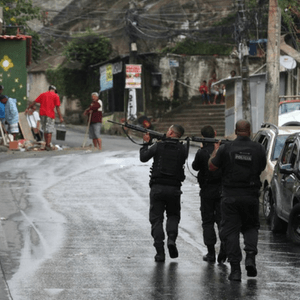 Brazil’s Spending on Public Safety Soared. So Did Violence.

RIO DE JANEIRO — Brazil’s homicide rate soared over the past two decades even as the state and the public sector greatly increased spending on public safety, Brazil’s government said Monday as it reported results of a rare study measuring the economic impact of violence in the country.

The cumulative cost of crime — including estimates of the loss of productivity and the cost of policing and incarceration — amounted to more than 4.3 percent of Brazil’s gross domestic product in 2015, the most recent year for which comprehensive data was available, according to the report.

From 1996 to 2015, the cost of violence in Brazil rose to more than $138 billion a year, from about $54 billion, a level government officials called unsustainable at a time when several Brazilian states are unable to legally raise their spending ceiling and others are broke.

The government put the total cost of violence during those two decades at $1.937 trillion.

“The numbers are striking,” said Hussein Kalout, the special secretary for strategic affairs, the division of the president’s office that conducted the study. “You can’t have a prosperous society with high crime rates.”

Social scientists have long studied the economic toll of violence in the Americas, but it is unusual for a government to undertake a study and release data that amounts to an acknowledgment of failure.

Mr. Kalout said President Michel Temer’s administration — the most unpopular since democracy was restored to Brazil in the 1980s — hoped that the study’s findings would inject urgency into the debate about crime prevention strategies, a chief concern ahead of October’s presidential election.

“The poor governance of Brazil’s public security sector is simply harder to conceal,” said Robert Muggah, research director at the Igarapé Institute, a Brazil-based organization that studies public security policy, which helped with the analysis. “Political and economic crisis at all levels of the government have revealed the extent of dysfunction.”

The shootout sent visitors at the hill, which provides a panoramic view of the seaside city, scrambling for cover and prompted officials to temporarily shut down the cable car system that ferries visitors.

On Sunday, seven men were found dead near a popular beach in the heavily guarded Urca district, which includes several military installations. Relatives of the men told local reporters they suspected that police officials had executed them. Police officials said the bodies did not show signs of having been executed, according to the newspaper O Globo.

With 62,517 violent deaths in 2016, Brazil reached a record-high homicide rate of more than 30 per 100,000 residents, according to the latest annual study that compiles law enforcement and health statistics. (In the United States that rate dropped to five homicides per 100,000 people from eight from 1996 to 2015.)

That study, which was released earlier this month, shows that black Brazilians make up a disproportionate and growing share of homicide victims.

While black or mixed-race Brazilians account for just over half of the country’s roughly 205 million people, they represented about 71 percent of homicide victims in 2016. Violence was the leading cause of death for Brazilian men in their early 20s, the annual study found.

The cost-of-violence study, for the first time, put an official price tag on a life cut short in its early stages.

For each homicide victim between the ages of 13 and 25, Brazil lost roughly $266,000 in productivity, the government concluded. The cumulative cost of lost productivity from 1996 to 2015 — during which the number of homicides rose to 54,000 from 35,000 — was roughly $218 billion. That amounts to about four years’ worth of health care costs, the country’s largest expenditure, at last year’s level.

These grim statistics come as no surprise to Edson Diniz, 47, an activist in Rio de Janeiro’s Maré district, which is among the areas where drug gangs hold more sway than the state.

The government study was released as Mr. Temer endorsed a law passed in March that seeks to enhance public safety coordination between state and federal officials.

The cost-of-violence report includes recommendations to make policing and incarceration more effective and less costly. But it steers clear of suggesting sweeping changes to Brazil’s strict counternarcotics policies and penal code, which several scholars and activists say are at the heart of the violence epidemic.

Mr. Muggah, the violence researcher, argued that policymakers should consider the merits of decriminalizing drug consumption, which several Latin American nations have done, and legalizing marijuana, as basic steps to reduce costs and violence.

“In Brazil, the reality is that the public security sector will almost certainly face a severe financial deficit in the coming years,” he said. “The priority must be on improving the efficiency and effectiveness of policing strategies — doing more with less.”

A version of this article appears in print on June 12, 2018, on Page A9 of the New York edition with the headline: Brazil’s Spending on Public Safety Soared. So Did the Violence.