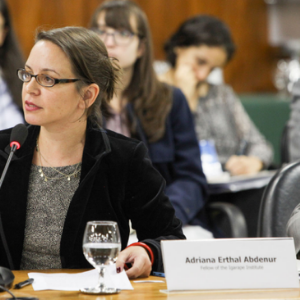 In some areas of the world, including Central America, rising sea levels and declining agricultural productivity due to climate change are expected to trigger major migratory flows, especially within countries. The role of policy-makers is it to promote local solutions while engaging in regional cooperation for a preventative approach.

A 2018 report by the World Bank, titled “Groundswell – Preparing for Internal Climate Migration”, highlights the impact of climate change on some of the most populated areas in the world. The report offers an in-depth analysis of how climate change contributes to internal displacement across three regions: Sub-Saharan Africa, South Asia and Latin America. According to the report, 140 million people in these regions will have to move within their country borders due to natural disasters and other climate impacts. In Mexico and Central America, 3.9 million people will be forced to leave their homes due to climate change. But some of the migratory flows are bound to generate greater social and policy challenges than others.

In order to identify “climate migration hotspots” – areas which people are expected to leave and areas which are expected to receive an influx of people  trying find new livelihoods –the authors modeled three potential scenarios ranging from most pessimistic to most optimistic. They found that it is precisely the poorest areas – those with inadequate water resources which are also most vulnerable to erosion and disasters –that are most likely to become climate migration hotspots.

Regions expected to experience high out-migration include the hot areas of the Gulf of Mexico and the Pacific coast of Guatemala, whereas the highlands of central Mexico and Guatemala are expected to receive high numbers of migrants. Climate and other environmental changes are not the only cause for migration – other drivers, such as increased violence and economic hardship, are often also catalysts of out migration.

Entry points to tackle climate migration hotspots in Mexico, Central America and beyond

At the international level, cutting greenhouse gas emissions remains an essential objective. However, global regimes – whether focused on climate change or centered on migration – have thus far failed to integrate the complexity of 21st-century mobility into their politics and institutions. While those global frameworks fail to adequately address the issue, international cooperation within the region will become especially important for climate change adaptation, for instance through policy coordination and knowledge exchange.

In addition to international efforts, the World Bank report recommends more robust development planning at the country level, an approach to development that takes into account the entire cycle of climate migration (before, during, and after migration). Inclusive and climate-resilient policies should be combined with targeted investments designed to maximize adaptive capacity. Examples include alternative job opportunities for climate migrants including short-term employment schemes; greater investments in human capital, in areas experiencing both in-migration and out-migration; and policies to support host communities. There is an urgent need for greater investment in research and analysis of climate migration at all levels.

The fact that most of the countries in the region do not recognize internally displaced people (IDPs) as a legal category poses challenges to both international efforts and national or local development planning. At the international level, policy debates focus on cross-border refugee flows, even when they are outpaced by internal displacement. As a result, the issue of forced displacement within Mexico and within other Central American countries remains a largely invisible problem.

The intensification of climate-induced migration is likely to bring internal displacement to light, but it is crucial that policymaking adapts to the necessary pace and adopts a preventive approach, working not only to minimize the effects of climate change in out-migration areas, but also to avoid social tensions from erupting during the migratory process. While some of the required solutions are local, international coordination and cooperation are also necessary due to the transnational nature of these emerging challenges.

Adriana Erthal Abdenur coordinates the International Peace & Security division of Igarapé Institute, a think and do tank dedicated to issues of justice, peace and security based in Rio de Janeiro.

[The views expressed in this article are personal.]