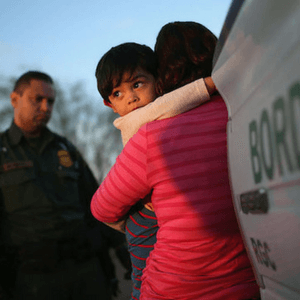 The immigration emergency on the U.S.-Mexico border is just the tip of the iceberg 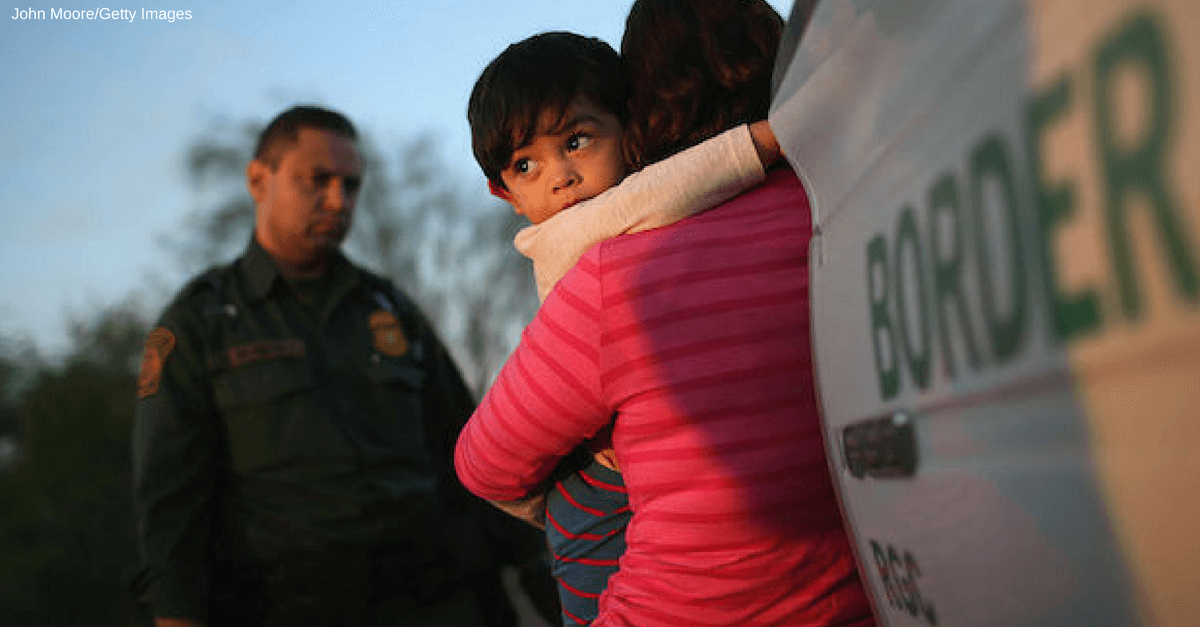 The images of children being forcibly separated from their parents at the U.S.-Mexico border are shocking by any standard. At least 2,300 children have been separated from their parents over the past two months alone, many of them fleeing unspeakable violence in Mexico and Central America. Their parents have been marched to detention centers where they languish for weeks. Stories are emerging of breastfeeding babies, toddlers, adolescents and teenagers penned up in cages. There are another 10,700 unaccompanied minors also languishing in U.S. custody.

As grim as the domestic situation is, it is just the tip of the international iceberg.

The world is in the grips of a monumental forced migration crisis. More than 68 million people are on the move, running away from armed conflicts and other forms of persecution and human rights violations. Over 25 million of them are refugees; the rest are internally displaced and stateless people. The last time so many humans were on the run was during World War II. And people are not just fleeing war zones in Africa and the Middle East, but from organized crime across the Americas.

As the recently introduced zero tolerance immigration policies in the U.S. amply show, there are signs of growing intolerance for asylum seekers and other migrants. In the U.S., refugee admissions have fallen by over 85 percent, from more than 200,000 in 1980, when the U.S. Federal Refugee Resettlement Program was created, to less than 28,000 in 2017. The new strategy launched by Attorney General Jeff Sessions in April is draconian: virtually all people arriving illegally are to be apprehended, detained and deported. Some 226,000 immigrants were deported from the U.S. in the 12 months ending September 30, 2017. The relief organization Doctors Without Borders called the new policy a “death sentence” for Central Americans fleeing violence.

Europeans are also hardening their attitude toward new arrivals. Some countries are barricading their borders to prevent migrants from entering and making it harder for those already there to remain. Italy’s newly elected coalition government says it will deport an estimated 500,000 to 600,000undocumented immigrants during its term, despite a sharp decrease in migration credited to a highly controversial deal between the European Union and the Libyan government (migrants are being rounded up by the coast guard and returned to detention centers in their countries of origin).

Western politicians’ complaints about “floods” of refugees and illegal migrants are seldom backed by evidence. The U.S. accepts no more than 0.6 percent of the world’s refugee population annually. Europe does marginally better: Germany is the only OECD country that ranks among the world’s top 10 refugee-hosting nations, accepting 1 percent of all refugees in 2016. In fact, the vast majority of refugees and migrants are not moving from the poorest to wealthiest countries but rather moving between one poor country and another. The burden assumed by countries such as Turkey, Jordan, Lebanon, Pakistan, Iran, Uganda, Ethiopia, Kenya and the Democratic of Republic of the Congo is an order of magnitude larger than that borne by the U.S. In other words, the daily responsibility to care for and support the world’s forced migrants falls squarely on the poor.

In the meantime, Latin America is experiencing another, silent, displacement crisis. Organized crime and violence is forcing hundreds of thousands to flee their homes every year. At least 17 of the top 20 most homicidal countriesin the world are in Latin America and the Caribbean. And while the region has traditionally been welcoming to new arrivals, that spirit of solidarity is dissipating in part from the sheer scale of population displacement, which has overwhelmed response capacity at the national and municipal levels.

It is neither Syria nor South Sudan that faces the world’s largest displacement crisis, but Colombia, where there were 7.3 million registered internally displaced people as of early 2017. Another 340,000 Colombian refugees are still abroad, mainly in Ecuador, Venezuela, Panama and Costa Rica, despite a peace deal in 2016 that effectively ended the war between FARC guerrillas and the Colombian government. Some would-be returnees are still wary of reprisal violence and threats from National Liberation Army (ELN) rebels and rump factions of the FARC who have yet to lay down their weapons.

Right next door, Venezuela’s prolonged political, economic and security crisis has also created a massive displacement emergency, as over 1.5 million Venezuelans have fled the country. Roughly one million of them have relocated to Colombian border towns, causing levels of intolerance and xenophobia to skyrocket. As of March, 146,000 Venezuelans had filed asylum claims worldwide and another 444,000 had been granted temporary and permanent residence permits abroad, a 2,000 percent increase from just three years ago. They are escaping threats of political persecution and criminal violence, but are also in search of food, medicine and basic services.

Brazil is hardly immune from displacement. Although fewer than 5,000 Brazilians have requested refugee asylum in other countries since 2014, Brazil is also suffering from a monumental internal displacement emergency. A combination of development projects (e.g. hydro-electric dams, mining concessions, federal highways), natural disasters and organized violence has resulted in the displacement of 7.7 million Brazilians since 2000. Added to this are close to 10,000 refugees in the country and over 35,000 asylum seekers. One reason for the spike in new arrivals is the 53,000 Venezuelans who have sought sanctuary in Brazil since the beginning of 2017, roughly half of whom are seeking asylum. Despite ongoing humanitarian operations in border areas, most new Venezuelan arrivals face precarious living conditions, and Brazilians are growing impatient for a solution.

The Northern Triangle countries of El Salvador, Guatemala and Honduras are experiencing the most severe displacement crises since their civil wars of the late 20th century. Roughly 130,000 people applied for asylum from these three countries in 2017 – a 1,500 percent increase since 2011. Most of them are seeking protection in Mexico and the U.S., but the majority are being denied. Indeed, efforts such as Programa Frontera Sur, a U.S.-backed plan to militarize Mexico’s southern border, have sought to stem the northward migration of Central Americans. Those who cannot afford to flee north have been internally displaced, often repeatedly. Honduras has roughly 190,000 internally displaced people, equivalent to 4 percent of the country’s population. In El Salvador, at least 71,500 people were displaced due to violence between 2006 and 2016. Similar to their Northern Triangle neighbors, they face threats of aggression, homicide, targeted assassination, extortion and child recruitment by gangs.

Complicating matters, the U.S. increased deportations of undocumented immigrants arriving from Central America and Mexico and tightened restrictions on new would-be asylum claimants. In fiscal year 2017 alone, the U.S. deported 75,000 nationals from the Northern Triangle countries. With the end of Temporary Protected Status (TPS) this year for Salvadorans, nearly 200,000 people risked of deportation; 57,000 Hondurans will face the same fate in 2020. The mass deportation of illegal migrants and convicted felons from Mexico and Central America was not started by the current administration,although President Donald Trump has dramatically ratcheted up those efforts since coming into office.

Mexico’s spiraling cartel violence and the government’s militarized response have also triggered unprecedented levels of displacement. The threat of organized crime, kidnappings, forced recruitment into drug trafficking organizations and gangs, as well as other forms of intimidation, are forcing people to pack their bags and seek safer ground. At the end of 2017, an estimated 345,000 Mexicans were internally displaced. Another 64,000 had applied for asylum and more than 10,000 were recognized as refugees, mostly in the U.S. At the same time, asylum applications by those entering Mexico have soared by 150 percent since 2017, most arriving from Central America and Venezuela.

A regional response is needed

Latin America’s interlocking displacement crises cannot be solved by a single state: they require a combination of regional and national responses. The good news is that governments across the region have offered rhetorical support for refugees in the 1984 Cartagena Declaration, the 1994 San José Declaration on Refugees and Displaced Persons and the 2014 Brazil Declaration and Plan of Action. Most Latin American countries have ensured that their national legislation is in line with international standards. This means they’ve introduced policies to facilitate the free movement of people and have taken steps to promote local integration, including through the formation of emergency assistance committees and the voluntary relocation of asylum seekers from poorer to wealthier areas.

Even so, the region is struggling to mount a coordinated and collaborative response. Approaches are fragmented and piece-meal. The development of a comprehensive regional approach – with support from partners such as the Organization of American States (OAS), the UN High Commissioner for Refugees (UNHCR) and the World Bank, among others – could facilitate more collective action. Given the sheer scale of the displacement crisis, Latin American governments will need some kind of Pan-American mechanism to set priorities, pool resources, scale up humanitarian action, and promote local integration measures for housing, education, health and work for both refugees and internally displaced people. They could do worse than to double down on the Regional Solidarity Resettlement Program, the Cities of Solidarity Initiative and the Borders of Solidarity program established over a decade ago.

Ultimately, the region’s governments, private sector and civil societies will need to take concrete efforts to tackle the underlying causes of forced migration, rather than responding to emergencies after the fact. This means tackling long-standing problems related to the structural inequality, grinding poverty, corrosive impunity and spiraling criminal violence shaping patterns of forced migration. Such actions should be backed by a regional data collection and sharing mechanism to help governments and service providers adapt to rapidly changing migration dynamics on the ground. Some of these priorities are expected to be addressed in two new global compacts – one for safe, orderly and regular migration and another for refugees – currently being negotiated in the United Nations. They also feature prominently in recently agreed-upon Sustainable Development Goals. The task now is to convert bold intentions into outcomes on the ground.