Defense of the environment 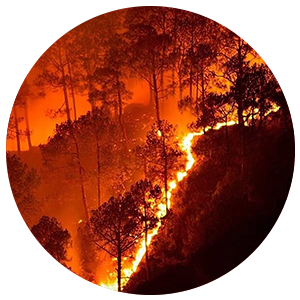 Igarape Institute consolidated its Climate and Security program launching two strategic articles and starting to guide the debate on the intersection between these themes. The Institute likewise stepped up its international profile on the issue, including with the Coalition Brazil Climate, Forests and Agriculture, the Paris Peace Forum and the Itaú Amazônia conference. In addition to publishing extensively on the COVID-19 and climate impacts, the Institute also launched a new partnership with Switzerland to expand awareness about the relationships between climate and security in the United Nations Security Council.

Since 2018, the Igarape Institute has developed the foundations of a new Climate and Security program. Some of his most recent products include a short documentary with the Financial Times in 2019, a publication in partnership with Instituto Clima e Sociedade, and a widely viewed data visualization of the impact of mining and a series of opinion articles and interviews in vehicles such as Project Syndicate, O Globo, Folha de São Paulo, Valor, Foreign Policy, Climate Diplomacy, Americas Quarterly, among others. The Institute continued this tradition with articles and interviews on related issues, including with Penguin/Random House.

Publications in 2020 focused on the challenges of deforestation and environmental crime. The first, Environmental Crime in the Amazon Basin: a Typology for Research, Policy and Action, is available in Portuguese, English and Spanish, and presents a typology to help the understanding of the picture of environmental crimes. The publication generated an opinion article for Folha, shared on Twitter audience of almost 8 million people and articles for Valor, Reuters and UOL. The second article, available in Portuguese and in English, is called Technological Solutions for Supply Chain Traceability in the Brazilian Amazon: Opportunities for the Financial Sector. It focuses in on how to improve traceability of supply chains and ways to improve ESG metrics. An oped on the article was featured by Folha.

For the third consecutive year, the Institute was also an invited guest to the Paris Peace Forum. This year, the team focused on environmental crimes in the Amazon Basin and proposals to reverse deforestation. The Institute also participated in another event on Extractive Industries in the Amazon, organized by Global Americans. Likewise, the Institute was a keynote and co-organizer of the first Itaú Amazônia conference called Climate Action in COVID Era, together with Amazonia Undercover, in Princeton.

The Institute also stepped-up its global work on climate and security in 2020. Specifically, it launched a new partnership to highlight the relationships between climate change and insecurity for the United Nations Security Council. A series of short visualizations will be presented to a range of permanent representatives in New York in 2021. In another development, the Institute’s directors are also going to be helping develop a new television series called “Amazônia, an environmental thriller” by the producers of The Wire and Sopranos, together with celebrated crime novelist Misha Glenny and BBC commentator, Kirsty Lang.