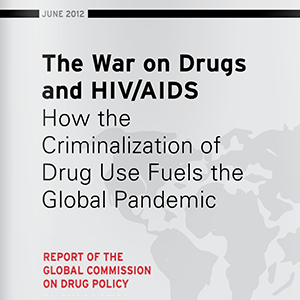 The War on Drugs and HIV/AIDS

The global war on drugs is driving the HIV/AIDS pandemic among who use drugs and their sexual partners. Throughout the world, research has consistently shown that repressive drug law enforcement practices force drug users away from public health services and into hidden enviroments where HIV risk becomes markedly elevated. Mass incarceration of non-violent drug offenders also plays a major role in increasing HIV risk. This is a critical public health issue in many countries, including the United States, where as many as 25 percent of American infected with HIV may pass through correctional facilities annually, and where disproportionate incarceration rates are among the key reasons for markedly higher HIV rates among African Americans.