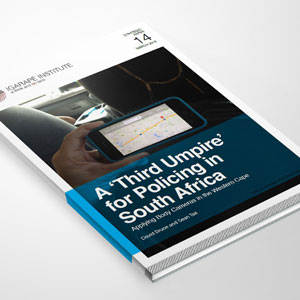 A Third Umpire for Policing in South Africa

David Bruce e Sean Tait
(February 2015)
Information and communication technologies (ICTs) are rapidly changing the way governments, public agencies and people interact. With the advent and spread of technologies – especially wireless connectivity and wearables – new forms of communication and information exchange are possible.
A new initiative called smart policing led by the Brazil-based Igarapé Institute and the South African African Police Civilian Oversight Forum (APCOF) is testing open source apps with police. They are exploring how new technologies can improve the oversight and accountability of police.
The basic goal of smart policing is to introduce mobile ICTs – especially open-source body cameras – with police in selected cities of Rio de Janeiro and Cape Town. Smart policing is already underway and supported by government agencies in Cape Town (since early 2013) and Johannesburg (since late 2014).
“A Third Umpire for Policing in South Africa” considers the wider context of body-worn cameras from the South African perspective. It offers first hand insight into the opportunities of these new smart phone based tools, but also challenges for scaling-them up.