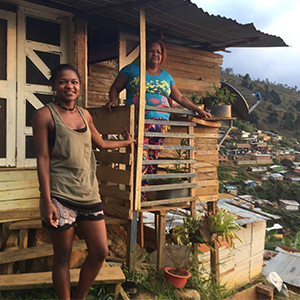 MEDELLIN, Colombia, March 22 (Thomson Reuters Foundation) – As a pink dusk settles on this poor hillside slum in the city of Medellin, 19-year-old Esteban Arrieta skips and shadow punches with a small group of budding boxers in a bare classroom.

Just a few years ago, Arrieta would have been skipping school, not a rope, and loitering on street corners smoking marijuana.

Arrieta did not join one, but teenage dropouts like him make easy prey for the gangs that have carved up Medellin’s slums – home to around half of its 2.5 million residents – as they recruit messengers, arms couriers and street drug dealers.

“It’s very difficult to get out of a society where the first thing you smell in this neighbourhood is the whiff of marijuana,” Arrieta told the Thomson Reuters Foundation.

“It’s difficult to be someone good when there are more bad opportunities than good ones,” he said during a break at the gym in the slum neighbourhood of La Honda in east Medellin.

When the boxing programme – Walking to the Ring – was launched here in 2016 by the non-profit International Group for Peace (GIP), Arrieta seized the opportunity.

The project aims to keep teenagers off the streets and away from crime by offering boxing as an alternative to gang life, in turn trying to make Colombia’s second city of Medellin safer.

For Arrieta, who lives in a sparse wooden shack with no running water in La Honda, a neighbourhood founded by families who have been displaced by Colombia’s war, boxing is a respite from his daily life and the surrounding gang violence.

“Boxing was a way out of many problems I had. It helped me give up drugs. Because thanks to boxing, it showed me a different way of life. It’s become my life,” Arrieta said.

“When I box I feel an escape … when I’m punching I get rid of all my anger, I de-stress.”

Once known as Colombia’s murder capital, Medellin is now a city in the midst of urban development.

There are far fewer night-time gun battles, and the chances of being hit by a stray bullet are lower, residents said.

But while murder rates have decreased dramatically, hotspots of gang violence and drug turf wars in the city’s slums persist. Of the 577 murders recorded in Medellin last year, nearly half were attributed to armed criminal groups.

In some slum neighbourhoods, “invisible borders” divide gang territory, and unofficial curfews set by gangs dictate when and where people can walk safely.

Latin America is home to 23 out of the world’s 25 most murderous cities, said the Igarape Institute, a security think-tank in Brazil, and tackling gang-related crime and urban violence is both a priority and a challenge.

Roughly 1 in 5 murder victims worldwide in 2012 was a Brazilian, Colombian or Venezuelan, and young men were the most likely to be victims of murder, the Igarape Institute said.

Former gang-member, Cesar Cardona, who runs the boxing project, knows only too well why young people are drawn in to ganglife, which he describes as a “dark world”.

“Getting recognition, having things, belonging to something, being accepted, having an adrenaline rush, there are many feelings that draw you in,” said the stocky 30-year-old, who joined a gang when he was 11.

“Boxing offers you the same that an illegal group offers you, but in a positive way.”

He said children, often from broken homes, expect to become part of a gang, because they grow up seeing gangsters with the nicest clothes, with motorbikes and with the prettiest girls.

“A young person believes that’s where he should be with the gangs – the chip has already been programmed,” Cardona said.

Gang life often starts with children hanging out on street corners, where gang members tempt them with offers of drugs, clothes and parties, he said.

Children usually begin working for gangs as watchmen, then become drug dealers and arms couriers, and collect extortion payments. As they move up the ranks they get involved in more violent crime, including murder and armed robbery.

The challenge, Cardona said, is to show a life beyond that which is common to slum neighourhoods, and offer an alternative to steer vulnerable children away from pervasive gang culture.

Through boxing, teenagers find a sense of identity, belonging, friendship and purpose, countering some of the push factors that cause young people to join gangs, Cardona said.

Cardona left the gang in his early twenties when he became an evangelical Christian. It is one of the few ways members can quit without facing reprisals.

“The main fear I felt was being alone, no longer having someone to watch my back, to vouch for me,” Cardona said.

Getting young people to stay away from crime and gangs is about raising their self-esteem and their hopes, making them better able to resist the threats and temptations in their communities, he said.

Teenagers growing up in poor slum areas often feel isolated and excluded from the rest of the city, he said.

“The boxing programme can project dreams, project strength … you can learn how to love yourself and see yourself as someone who can contribute positively to their communities.”

Medellin has made big strides in using public transport to integrate its slums with other parts of the city. Set up in 2004, a system of cable-cars ferries 40,000 people a day from the hillside shantytowns to the wealthy downtown.

But the valley’s affluent tree-lined neighbourhoods are a world away from the warren of shacks where slum-dwellers live.

Those aspects of stark inequality and social exclusion are a problem in most Latin America cities, the UNDP has said.

Hundreds of millions of dollars have been injected into social development projects and slum renewal in Medellin in the past decade, but that has not translated into decent housing, better education or jobs for young people in La Honda, residents said.

Poverty remains rife, as boxer Laura Saavedra knows well. She sees boxing as a respite from the daily grind that forces her and her mother, sisters and brother to sell their bodies to put food on the table.

She said the presence of local gangs means she does not feel safe going out at night.

“When I’m boxing, I feel liberated,” said the 19-year-old as her eyes light up.

Saavedra hopes to become a professional boxer and break a cycle of poverty and prostitution by showing that not all young women are destined to follow their mother’s footsteps.

“You just feel bad when you are using your body,” Saavedra said. “I’m going to show that us women, we don’t have to go in the same direction, that we can change and make a difference.” (Reporting by Anastasia Moloney @anastasiabogota, Editing by Robert Carmichael. )