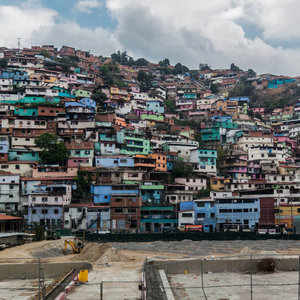 The planet is urbanising at a rapid pace. There is not agreed definition of what constitutes a city, however the world´s new geography includes dozens of super cities (population of 40 million+), hyper-cities (population of at least 20 million), conurbations and more. While a number of the world’s largest cities still reside in North America and Western Europe, most future population growth will occur in sprawling cities and slums of Africa and Asia. There are tremendous opportunities and threats, with major implications for the humanitarian and development sector (Muggah 2012).

Fragile cities are not confined to fragile states or conflict-affected countries. All cities exhibit some degree of institutional fragility; however the extent of their fragility varies considerably. In some cities, such as Aleppo, Bangui, and Caracas, urban institutions are stretched to breaking point. Cities like Abuja, Indore and Nairobi are also at risk – albeit to a different degree. Even comparatively well-developed and planned cities such as Accra, Johannesburg, and Islamabad are not immune.

City fragility occurs when municipal authorities and their institutions are unable, or unwilling, to deliver basic services to urban residents (Muggah 2015). It is triggered by the rupture of a municipal region´s social contract. Cities become fragile when the legitimacy, authority and capacity of its institutions can no longer adequately fulfill core functions such as the guarantee of security and safety for citizens, property and infrastructure, access to water, electricity, and sanitation and the preservation of basic norms and rights. In such situations, cities can no longer sustain public goods and citizens resort to their own devices to satisfy their needs and preferences. In such circumstances residents may create parallel or hybrid systems of governance, order and security.

Fragile cities are especially susceptible to (or experiencing) a rapid deterioration of core functions when exposed to a combination of internal and external risks that similar undermine federal and state-level institutions. These include: concentrated disadvantage, social and income inequality, youth unemployment, police and judicial impunity, exposure to sudden onset natural hazards – including floods and earthquakes, rapid inflows of displaced populations and sudden price shocks.

Recent studies have examined the geographic and temporal distribution of fragility in cities. For example, a new data visualisation (Citiscope February 2016) tracks risks in over 2,100 cities with populations of 250,000 people or more. It finds that city fragility does not appear to be restricted to poor developing countries, and also demonstrates that those that are medium-sized and fast growing appears to be most at risk.

Cities will determine future progress in achieving stability and development. Yet we know alarmingly little about what is going on in them, especially those that are fragile. Given that making cities more inclusive, safe and resilient is the focus of Sustainable Development Goal 11, this is worrying. There is much that cities around the world can learn and share when it comes to exiting fragility and investing in resilience (Kilcullen 2012; Muggah 2012).

The good news is that city fragility is not permanent. There are remarkable examples of fragile cities – including Ciudad Juarez, Bogota and Medellin – turning things around (NPR 2016). How do they do this? They start with a clear plan and an enlightened leadership, especially successive mayors that make a plan and stick to it. This requires brokering positive agreements between national, state and municipal authorities, but also positive partnerships with the private sector. The best cases involve public authorities that commit to data-driven solutions, evidence-based approaches, and problemoriented strategies. A number of inter-city networks, such as Cities, Local and Regional Governments (UCLG), the newly established Strong Cities Network, and a new Global Alliance for Urban Crises have also emerged to facilitate sharing of lessons and strengthen partnerships, though these are still comparatively limited in Africa and Asia.

While there is no silver bullet, there are several strategies that help enhance resilience in cities experiencing fragility. Important gains can be seen in cities that have purposefully built inclusive public spaces, broken down barriers between wealthy and poorer areas, supported predictable transport and access to basic services, invested in hot-spot policing and focused deterrence, and created meaningful opportunities for young people. City authorities that develop municipal natural disaster mitigation plans, upgrade zoning and building codes (and foster mixed commercial and residential housing), and cultivate new technologies to improve emergency response also do well. The key is to recognise that, as first and last responders, local populations are the most likely to enable the shift from fragility to resilience (McIIwaine 2013).