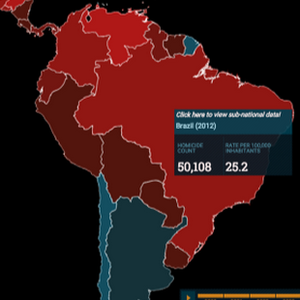 The World’s Most Murderous Places, and Other Lessons from a Killer Map

Some cities in Colombia and Brazil are deadlier than war-torn countries, according to a new interactive map of the world’s murders

First, some numbers: In 2012, 437,000 people were killed worldwide, yielding a global average murder rate of 6.2 per 100,000 inhabitants. A third of those homicides occurred in Latin America and the Caribbean, home to just 8% of the world’s population. In Brazil, murder is the leading cause of death for young men, while in parts of Europe violent death is a rare and shocking anomaly.

To make this data clear and to begin to understand the dynamics beneath it, the Rio de Janeiro-based Igarapé Institute has created an interactive map, the Homicide Monitor, which brings together all publicly available information on homicide in 219 countries. “A better diagnosis of the scale and scope of homicide can help design prevention and reduction measures,” says Robert Muggah, the research director and program coordinator for Citizen Security at Igarapé. “Homicide is a problem that can be solved if we start treating it like a public health issue.”

Data on violent death can be difficult to obtain, since governments are often reluctant to share their homicide statistics. What data is available is sometimes inconsistent and inconclusive. “Information on lethal violence is dispersed and often not comparable,” says Muggah.

The open-source visualization tool tracks the total number of homicides and murder rates per country, broken down by gender, age and, where the data is available, the type of weapon used, including firearms, sharp weapons, blunt weapons, poisoning, and others. For the most violent region in the world, the 40 countries in Latin America and the Caribbean, you can also see statistics by state and city. That geographic specificity helps to underscore an important point about murders, says Muggah. “In most cities, the vast majority of violence takes place on just a few street corners, at certain times of the day, and among specific people.”

WHY SOME CITIES HAVE MORE MURDERS

Murder rates vary hugely around the world. Thirty-one countries, mostly located in Europe and Asia, have homicide rates below 1 per 100,000. Cities generally have higher murder rates than countries. The deadliest city in the U.S.—Detroit—had a homicide rate of 45 per 100,000 people in 2013. In the Brazilian city of Ananindeua, an astonishing 125.7 people were murdered in 2012 per 100,000 of the population.

“It is not so much poverty, as income and social inequality, that gives rise to above-average rates of violent crime,” says Muggah. He adds that rapid unregulated urbanization, a youth bulge in growing cities, weak policing, justice systems, and penal institutions are also critical factors in some parts of the world.

In Brazil, where the Institute is based, 56,337 people were murdered in 2012, a rate of 29 per 100,000 people. Yet the country was not always one of the world’s most violent places. For most of the 20th century, the homicide rate was more in line with countries in North America and Western Europe. During the 1980s and especially 1990s, however, Brazil’s homicide rate climbed dramatically. In this case, the main reason was drugs.
Brazil is now the primary transit country for Peruvian and Bolivian cocaine coming to Western Europe and is also believed to be the second largest consumer of cocaine in the world after the U.S. “Drug transit, retail, and consumption—and the competition over turf and markets—are a key driver of murder,” says Muggah. “The most badly affected segment of the population are young black males.”

In the U.S. Muggah says the picture is similar. “About 0.5% of people generally account for up to 75% of homicidal violence in New York and other U.S. cities.” Last year, The New York Times used data from the New York Police Department to assemble an interactive map of murders in the five boroughs. In the 73rd Precinct in Brooklyn, the borough with the most homicides at 2013, 31 people were murdered.

HOW TO REDUCE THE MURDER RATE

Homicide rates have dropped by 40% In North America and Western Europe over the past two decades. “Explanations range from improvements in law enforcement to reductions in family size and improvements in social welfare,” says Muggah. Some have pointed to the effect that desegregation and immigration can have on reducing neighborhood violence.

Concentrating prevention efforts on high-risk populations and their communities can be extremely effective in reducing violence. For that reason, so-called”hot spot” policing and better justice systems, combined with community initiatives, have helped to reduce violence in many parts of the world.

One of the most spectacular success stories of homicide reduction comes from the Colombian city of Medellín. Medellín was the murder capital of the world in the 1990s but a series of determined mayors turned things around by tackling crime and social exclusion in the city’s poorest and most dangerous neighborhoods and connecting the slums with middle-class areas via public transport. Murders declined by almost 80% over two decades.

“One of the most effective ways of reducing homicidal violence is by purposefully investing in inclusive social cohesion, civic coexistence, mobility, and public spaces,” says Muggah. “City planners and private investors must avoid the temptation to reproduce gated communities and cities of walls.”

THE PROBLEMS WITH KILLER DATA

The Igarapé Institute collected national homicide data from the United Nations Office for Drugs and Crime (UNODC), which gathers information from governments around the world. The map also uses data from primary sources such as police, ministries, and national statistical offices in Latin America and the Caribbean. But Muggah noted the immense challenges in tallying and comparing homicide data, since countries often categorize and count homicides differently. In some places, homicides are only counted after an arrest and prosecution is made; in others, homicides are based on coronary reports. Sometimes, other types of violent death including accidents, terrorist incidents, war-related deaths, and even suicides can be included in homicide numbers.

Taboos also keep homicide figures hidden. “A major challenge continues to be Africa, Asia, and the Middle East,” says Muggah. “Homicide is still a taboo subject in many countries in these three regions, and governments are wary of disclosing information on the extent of the problem.”