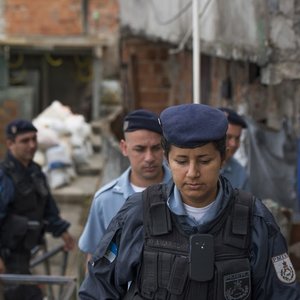 When Canadian Robert Muggah started visiting the Rio de Janeiro slum known as Santa Marta, he wasn’t always sure he’d make it out.

“We literally had to duck around windows and avoid the front streets because stray bullets would be bouncing around,” Muggah says.

His work as research director of the Igarape Institute, a Brazil-based think-tank, often takes him back to Santa Marta. And even though he says the violence has decreased, it took us several attempts to find a cab driver who was willing to take us there, because of the ever-present fear of catching a stray bullet.

Most murders happen during gang fights over drug turf, Muggah says. But almost one in five homicides in Rio comes at the hands of police.

“You’d have groups of really ruthless, repressive cops coming into communities and shooting the place up, trying to retrieve drugs and guns,” he says.

Tatiana Lima, Santa Marta’s police unit commander, acknowledges many of those who get hit during shootouts aren’t criminals.

“Unfortunately when you have confrontations between felons and the police, there’s always the risk of a stray bullet hitting a civilian,” Lima says.

“We can’t be 100 per cent sure and guarantee the policeman will be able to exactly hit that one specific criminal.”

After the high-profile killings of unarmed black men in the United States, civilians and police forces themselves have been asking for body cameras. But the technology is expensive; outfitting about 6,000 officers with body cameras will cost Los Angeles close to $76 million over five years.

Rio would need two or three times that number. And the country’s security budget, already stretched, has just been slashed by more than 30 per cent.

Clearly‚ Muggah thought, Rio police need something cheaper — like an app that can turn an officer’s phone into a combination body camera/GPS tracker.

“It’s called CopCast,” Muggah says. “It can follow cops over time. The information is stored and encrypted on phone, as well as on the cloud.”

His colleague Bruno Siqueira, who helped develop the app, turns it on and points his phone at me.

“So this is you, we are live streaming to our server, and this would be the officer vision of what’s going on in front of him,” he says.

The video is recorded on the phone and back at the police station.

“It can even be live streamed,” Siqueira says. “And this live streaming can be started by the officer if he needs help and he needs the attention of the commander, and also by the commander.”

In her office, Lima studies a map projected on the wall, showing where her officers are patrolling.

“The ability to show the location of the officers in real time enhances the management work,” Lima says. “So we know how long it took the officer to get to a certain place, how long they stayed there, so from a management perspective it’s very useful.”

And, she says, the app could provide vital evidence the next time an officer shoots someone. “This system will be able to help us verify the exact direction the policeman shot at, his position, through pictures and sound. So this is extremely important.”

So how do officers feel about their actions being monitored when they’re on duty?

Officer Juliana Abreu straps the phone to the front of her bulletproof vest and begins her patrol in Santa Marta. She says she’s just wearing another layer of protection.

“This is a way to make our work more transparent,” Abreu says. “Also, it’s a way to protect ourselves in any situations that may arise, in the case of false accusations, or if the community films something that isn’t clear, we would have our own view to provide information about what happened at the time.”

“This model is being developed according to the specific needs of our police offers, so we can add multiple features in a single device,” Lima says. “So the officer is equipped with a minimal amount of gadgets.”

Muggah says once the app is fully tested, it will be available free. Larger police forces that want additional options may have to pay. But the basic system will be available to anyone who wants to use it. And Muggah says its use won’t be restricted to developing countries.

“We’ve got calls from the (United) States,” Muggah says. “It could definitely be used by smaller communities,” especially by police forces that don’t want to spend millions on the hardware and on contracts with body-camera companies.

Already, he says, emergency responders are integrating more functions with their phones. He believes phone-based body cameras may eventually become the norm.

“This could leapfrog the stand-alone body cameras,” he says.

Close to 100 police officers, and firefighters in 30 stations, are testing the devices in Rio and in Cape Town, South Africa.

The Igarape Institute hopes to scale up the project to include 1,000 emergency responders in two to three months.