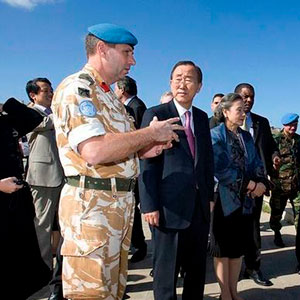 The 70th anniversary of the founding of the United Nations (UN) has prompted new questions about the organization’s ability to effectively address peace and security problems around the globe. The UN peace and security architecture has expanded dramatically in the post-Cold War period, partly in response to the changing nature of conflict, but also as a reflection of the organization’s own ability to provide effective responses.It is important to see this expansion in the context of the changing dynamics of conflicts. After an increased number of complex intra-state conflicts in the 1990s, the world saw a sharp decrease in numbers in the early 2000s. However, in the past five years, these numbers have been on the rise.

This is particularly important for peace operations, perhaps the most visible of the international responses to conflicts. The results of peace operations have been mixed at best, particularly for the robust missions, which are continuously drawn-out over prolonged periods and face increased challenges in their ability to deal with transnational threats, including terrorism, and the protection of civilians.

Attempts of reforming the UN’s peace and security mechanisms have been undertaken since the 1990s. In 1999, the so-called the Brahimi Report was a response to the challenges faced by UN peacekeeping in the 1990s, especially the failure in protecting civilians in Bosnia and preventing the genocide in Rwanda. While the report resulted in some positive changes, including the creation of the UN Peacebuilding Architecture in 2005, problems of effectiveness, funding, coordination, and coherence remain. Among them: peace operations have not fulfilled the goals of protecting civilians, and the UN has not been effective in preventing conflicts and sustaining peace.

It is perhaps not surprising that a new series of reviews of the UN’s peace and security architecture were conducted in 2015— namely on Peace Operations, the Peacebuilding Architecture, and Women, Peace and Security. These reviews focused on ensuring a better role played by the UN and recommended (among other points) that member states and the UN place conflict prevention at the core of its responses, as a means of becoming more effective in avoiding conflicts and sustaining peace.

This idea is not new. The need to prevent conflict in the first place—rather than waiting to address it once violence has broken out—is found in the UN Charter itself, and it was in fact the main driving force behind the creation of the organization. During the Cold War, calls for greater investment in conflict prevention were made by both sides of the ideological divide, and it was a central theme in the Non-Aligned Movement’s (NAM) positions on the UN’s role in the promotion of peace.

In the post-Cold War era, and especially since the turn of the millennium, the so-called rising powers have also invoked the language of conflict prevention at the UN, sometimes in reference to their defense of national sovereignty and their critique of military interventions as it has spread in the past two decades. Yet conflict prevention, and the idea that the UN should play a central and far-sighted role in promoting it, is not exclusive to these states. Smaller developing countries, including so-called fragile states, have also been vocal in calling for a greater emphasis on prevention as a means for longer-term sustainability of peace processes. Some of the major donor states have also begun stressing the need for innovative thinking on conflict prevention.

The 2015 Reviews, as well as subsequent UN General Assembly and Security Council Resolutions, argue that the fragmentation and “silos” that mark UN responses to conflict are not just costly but also reduce the overall impact of UN efforts. At the same time, many—both within the UN and outside it—believe that an increased focus on conflict prevention would be far cheaper than continuing with the narrow focus on ongoing or recurring conflicts. However, if the key idea of turning conflict prevention into a core responsibility of the UN is broadly accepted among stakeholders, why has the UN been so slow to implement it?

Part of the problem is that it is difficult to get any organization to behave in a precautionary manner, even when the institution’s constitutive parts consider such a stance to be economically more cost-effective than remedial measures. Likewise, it is hard to get stakeholders to think about the root causes and to adopt a long-term view of conflict, especially because it is difficult to assess the overall impact of preventive measures. How do we know when conflict prevention works? Without presenting better mechanisms for conflict prevention planning and evaluation, it will be difficult to significantly alter the structure of incentives keeping this principle a secondary function of the UN.

In general, the UN has—even if implicitly—adopted short-term and silo views on the causes of conflicts, which consequently shape its responses to instability. Conflict prevention mechanisms that are already in place, such as early warning systems, are mostly designed to detect only imminent or recurring conflicts. Since outbreaks of conflict are typically the manifestations of much longer trends and underlying factors, this shortsighted approach to prevention is suited to only a small number of instances. Furthermore, the emphasis on imminent conflicts, rather than long-term trends, has made conflict prevention a politically sensitive topic, especially for member states that fear inclusion on such lists may lead to stigma and even undesired intervention.

In addition, early warning mechanisms at the UN have been widely designed and implemented in an ad hoc and piecemeal manner, dealt with by different components within the Mission structure and UN agencies, from the UN Security Council to Joint Mission Analysis Cell (JMAC). The latter in particular illustrates some of the limitations of the current UN approach. Although the JMAC is established to coordinate analysis and provide early warning, in reality, it often does not optimally utilize the information and capabilities of all Mission components, such as police and the UN Department of Safety and Security (UNDSS). This results in skewed and incomplete analysis, insufficient for effective early warning and operational planning. An effective early warning system should provide integrated analytical products that allow decision-makers to make calculated shorter operational decisions, but that also enable them to make long-term assessments—and that these become an intrinsic part of the sustainable peace planning processes.

However, the biggest challenge goes beyond just focusing more on conflict prevention. The concept of conflict prevention remains too vague and therefore difficult to implement. There are still critical questions to be answered on what it really means for specific roles and responsibilities, especially within the UN General Assembly, the Security Council, and the Peacebuilding Architecture.

In order to operationalize the concept into policies and mechanisms within the UN and its partner organizations, such as the African Union (AU), the idea of conflict prevention needs more than just the principled acceptance from member states and the UN. Far better specification is needed, along with practical elements that would enable the formulation of concrete strategies and plans.

Thus, in order for conflict prevention to become a central element in the UN’s approach to peace and security, there is essential work to be done by the UN and other involved actors. The task also requires a better understanding of what makes conflict prevention effective, as to assist the UN in identifying types of mechanisms to be put in place. This is particularly important in reducing the fragmentation seen among different components—such as peace operations, peacebuilding efforts, and conflict prevention.