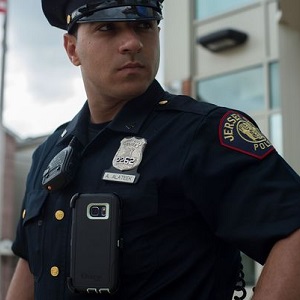 The new system works like this: Officers download the CopCast app on a smartphone, and supervisors download a desktop version. Officers can strap the phone onto their chest and hit a button to start recording audio and video, which can be streamed live by supervisors monitoring from headquarters and show the exact location of the officer using GPS technology. The officer hits another button which ends the stream, and the entire encounter is automatically saved on a server.

Many body cameras on the market now require officers to download all their video at the end of their shift, meaning the video must then be reviewed and organized before supervisors can look over any footage.

Body camera companies usually sell their services as part of an all-inclusive package. Wexler used the example of cellphone carriers, which give customers massive discounts when buying a phone in order to lock them into long-term data contracts.

Similarly, body camera companies provide discounted, or free, body cameras but require police departments to use their services to store the reams of video collected by officers.

Gideon Morris, the head of community safety for the state of Western Cape in South Africa, said he experienced severe sticker shock when he first solicited bids to equip his officers with body cameras.

“They’ll give you a unit price and you’ll do the calculation and you’ll say, ‘Guys, not in this era,'” said Morris, who went on to use CopCast.

Brian Platt, the chief innovation officer of Jersey City, said the smartphone app — which has a basic version that is free to any police department — allows his city to shop around for more inexpensive storage and support services.

Wexler said flexibility is much needed in an industry that is dominated by a handful of companies, led by Taser International, which changed its name to Axon in April. Wexler said more than half of the nation’s medium- to large-size cities are using or testing body cameras. But he said 90% of the nation’s 18,000 police departments have 50 officers or fewer, and they are struggling to afford body cameras.

“If the industry needs anything it’s competition and innovation,” Wexler said. “We’ll be looking to see how this gets rolled out.”

CopCast was created by the Igarapé Institute, a Brazilian think tank that focuses on security and justice issues, and Jigsaw, a technology incubator created by Eric Schmidt, the former CEO of Google who is now the executive chairman of its parent company, Alphabet.