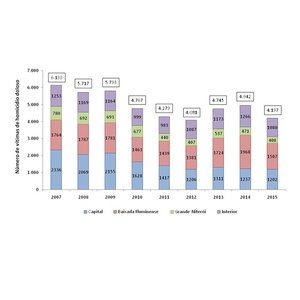 Actions taken by various public security agencies, such as the Secretary of State for Public Security (SESEG) and the Civil and Military Police forces for the State of Rio de Janeiro (PCERJ and PMERJ, respectively), parallel this downward trend. Among the initiatives is the implementation of the Targets and Results Monitoring System (SIM), which strives for better coordination of these pubic agencies by setting targets for reducing key crime indicators, as well as adopting financial incentives to drive and coordinate joint agency action.