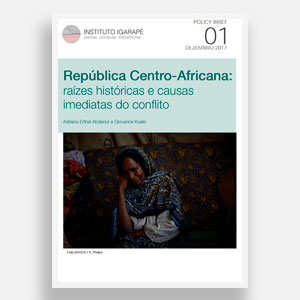 The violence in the Central African Republic (CAR) is recurrent, involving historical factors such as cattle wars and control of the diamond mines, discontent of minorities and the absence of an effective state since colonial times. These factors have interacted with an extreme dynamic since 2013, whose immediate causes are related to the rapid fragmentation and reconfiguration of illegal armed groups, especially the former Seleka coalition and the sectarian Anti-balaka militias. The combination of these historical and contemporary elements has lead to a scenario of high unpredictability and serious challenges for the Protection of Civilians (PoC) and the support of peace. The impact of the various international interventions and the context of French colonization on the present United Nations Mission in the country (MINUSCA) must also be considered.

This policy brief from the Igarapé Institute presents the historical roots and immediate causes of the conflict in the Central African Republic in order to provide support to international, national and local actors who may play a relevant role in conflict prevention in the country and, more broadly, in the central region of the continent.

View PDF in Portuguese only