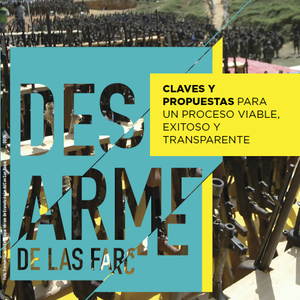 (25 September, 2015) After five decades of war, the conflict between the Colombian government and the Revolutionary Armed Forces of Colombia (FARC) may soon come to an end. Colombia´s President Santos announced this week that a peace agreement could come into effect within the next six months. The so-called General Agreement Ending the Conflict and Building Sustainable Peace covers a host of political, social and security priorities, not least the collection of FARC weapons and the demobilization and reintegration of former-rebels into civilian life. The Igarapé Institute and the Fundacion Ideas para la Paz (FIP) have launched a new study (PDF below) that examines the opportunities for disarmament of the FARC. It draws on evidence from around the world of what works, and what does not, when it comes to collecting weapons when wars come to an end. The collection, storage and destruction of small arms and related equipment is arguably one of the most politically challenging, if critical, aspects of the peace process.