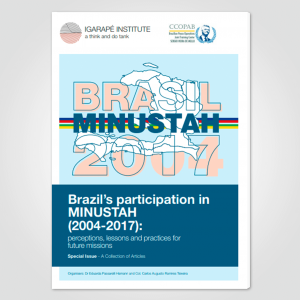 Brazil’s contribution to United Nations (UN) missions started exactly 70 years ago, when Brazilian military officers and diplomats participated in the first multinational team authorised by the Organisation to act in the Balkans in October 1947. About 10 years later, the first UN mission with troops (formed units) also included Brazilian military soldiers. Since then, Brazil has participated in 47 UN missions, including 43 peacekeeping operations, and has deployed over 50,000 men and women.

These and other extremely important topics relative to Brazil’s participation in UN missions are addressed for the first time in this collection of articles. Indeed, our reflections on what happened over those more than 10 years in Haiti must be deep and diverse.

As such, not only will this experience contribute to historiography, but it will also enable the identification of critical elements to guide decision-making processes in the near future, when Brazil shall define how, when and where to deploy its troops to yet another mission in which the Brazilian flag shall fly alongside the UN banner. This publication aims at contributing with diverse views to this irrefutable discussion.
View PDF