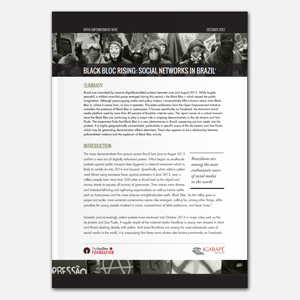 Brazil was convulsed by massive digitally-enabled protests between June and August 2013. While largely peaceful, a militant anarchist group emerged during this period – the Black Bloc – which seized the public imagination. Although preoccupying media and policy makers, comparatively little is known about what Black Bloc is, where it comes from, or how it operates. This latest publication from the Open Empowerment Initiative considers the presence of Black Bloc in cyberspace. It focuses specifically on Facebook, the dominant social media platform used by more than 80 percent of Brazilian internet users. The report comes at a critical moment since the Black Bloc are continuing to play a major role in ongoing demonstrations in Rio de Janeiro and Sao Paulo. The assessment finds that Black Bloc is a new phenomenon in Brazil, appearing just two weeks into the protests. It is highly geographically concentrated, particularly in specific areas of Rio de Janeiro and Sao Paulo, which may be generating demonstration effects elsewhere. There also appears to be a relationship between police-related violence and the explosion of Black Bloc activity.