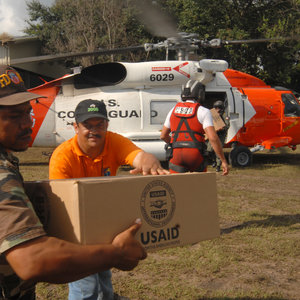 Are aid agencies ready to deal with war, terrorism and crime in cities?

War is back. After a half-century decline, the frequency and intensity of armed conflicts is on the upswing.  The number of civil wars around the world increased sharply over the past five years. The number of people violently killed a year tripled, driven largely by deadly conflicts unfolding in cities across Syria and Iraq, but also in Afghanistan, Ukraine and Yemen. More people are being forced to move than ever before: there were at least 60 million refugees and internally displaced people in 2015.

Terrorist violence is also on the upswing. But when it comes to the risk of dying from terrorism, Brussels, Paris, London and New York are the outliers. The bulk of terrorist victims over the past year were concentrated in just 20 cities in Iraq, Nigeria, Pakistan, Somalia and Syria. Major urban centers like Baghdad, Karachi and Mogadishu are widely known targets while cities such as Ramadi and Baaquoobah in Iraq, Al-Kamisli and Al-Raqqh in Syria, and Maiduuri and Kismaayo in Nigeria and Somalia are even more dangerous.

While occurring far from the global headlines, criminal violence is even deadlier than armed conflict and terrorism in terms of lives lost. At least five times more people around the world die as a result of homicide. Tens of millions of people are fleeing violence, including gang hot spots in Central and South American cities such as Acapulco, San Salvador, San Pedro Sula and Recife. Recent research shows that homicidal violence outpaces conflict and terrorism by a significant margin.

Whether motivated by politics, economics or extremist ideology, organised violence is migrating to the city. This is predictable given the dramatic surge of urban populations over the past few decades, especially in the Americas, Africa and Asia. The consequences of urban violence are also surprisingly common regardless of its primary causes. Cities themselves are the sites of new kinds of violent siege, with urban residents cut off from access to food, medicine and basic services.

Cities are the frontline of twenty first century humanitarianism. Traditionally oriented toward rural operations, humanitarian and development agencies are turning to the city. They are finding it rough going.

Take the case of Bangui, Central African Republic’s besieged capital. Following the eruption of violent sectarian clashes which killed more than 60 people and displaced thousands, humanitarian agencies were caught wrong-footed. In spite of massive U.N. peacekeeping and aid operation, the violence could not be stopped and aid delivery systems were paralysed.

Bangui came to a standstill and its citizens were trapped, cut off from basic supplies of medicine and food for days. Even veteran humanitarian organisations such as Medecins Sans Frontieres (MSF) with 20 years experience in the country were unable to respond to those most in need. Bangui is hardly an isolated incident, but something of the new normal. The storyline is unsettlingly familiar in the wake of crises in Port-au-Prince, Abidjan, Mogadishu, Baghdad and Kabul to name a few.

It is not just the threat of urban violence combining conflict, extremism and crime that is keeping relief agency directors awake at night. Urban authorities are woefully ill-equipped to mitigate the risk of natural disasters.

Successive IPCC reports have warned about the severe threats posed by climate change in cities and their peripheries. Rising sea levels, super typhoons and scorching droughts will put enormous pressure on billions of people, ecosystems and economies. Many cities – especially coastal ones – are failing to adequately plan for the coming storm. Humanitarians would do well to come prepared.

Researchers working with the United Nations University, the Igarapé Institute and Stanford University are examining the cumulative impact of these converging urban risks. They have shown how fragile cities – those where these risks are most acute – threaten not just city residents, but countries and regions.

Fragile cities are especially susceptible to break down when confronted with a combination of concentrated poverty, income and social inequality, youth unemployment, rapid unregulated urbanisation and heightened exposure to natural hazards.

After reviewing risk in over 2,100 cities with populations of 250,000 or more, we found that fragility is not necessarily where you might think. For one, city fragility is not restricted to poor under-developed countries. There are at least as many fragile cities in high and upper-middle income settings as in lower-middle and low incomes ones.

What’s more, there are twice as fragile cities outside of war zones then in them. Nor is it necessarily the largest cities that are most vulnerable. Rather, it is smaller- and medium-sized cities that are more likely to experience fragility.

If humanitarian agencies are to help reverse fragility, they will need to work in partnership with city authorities and civil societies. Arguably their most effective weapon will be strengthening the resilience – the capacity of urban institutions to adapt and rebound – to complex human-made and natural stresses.

And while scholars quibble over definitions of what resilience means in theory, most agree that developing municipal disaster plans, investing in early warning, upgrading zoning and building codes, and designing-in measures to lessen risk must underpin the humanitarian response in cities. This is because local populations are the first and last responders to any crisis and reinforcing their abilities to manage shocks is essential.

Notwithstanding this sensible advice, most humanitarian aid agencies are not investing in resilience programming. According to one study, it is still relegated to a small corner of humanitarian action. Instead, given the tremendous needs in war zones and in the wake of natural disasters, the priority is understandably on providing life-saving relief. Preparedness and capacity building initiatives that build resilience are regarded more as an after-thought. But this is not enough. Humanitarians and donors will need to move from an either-or to a both-and mentality.

The good news is that cities are starting to take matters into their own hands. Some of them are beginning to learn from one another about how to mitigate violence, but also prepare for crises and disasters before they hit.

These efforts could be strengthened by the creation of a Global Alliance for Urban Crises as is being proposed at the upcoming World Humanitarian Summit. Such an alliance could harness the potential that cities and towns have to become more crisis-proof to resist future threats.

The Global Alliance would build on a growing list of networks designed to enhance knowledge and capacity exchanges between cities. Examples include the United Cities and Local Governments and many others that are serving as key knowledge brokers in sharing ways to deal with real problems on cities.

There are also other promising groups such as the Global Safer City Network, the European Forum for Urban Safety, Mayors for Peace, Cities for Peace, and the Municipal Alliance for Peace in the Middle East that are seeking to enhance urban security and prosperity across international frontiers. Humanitarian actors need to learn work with these networks if they are to scale up their effects in the urban century.