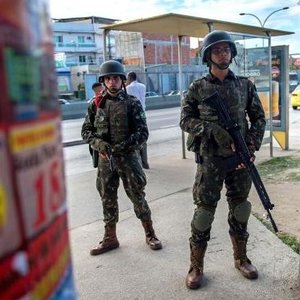 Violence in Rio: “We Have to Look for a Collective Solution”

After falling steadily for more than a decade, violence in Rio de Janeiro is again on the rise; 2,723 people were killed in Rio state in the first six months of 2017 alone. To understand what’s driving the increase, AQ spoke with Ilona Szabó, cofounder and executive director of the Igarapé Institute, a Brazil-based nonprofit that studies security, justice and development challenges in the region. This interview has been edited for clarity and length.

Violence is surging in Rio de Janeiro after years of progress. What are some explanations for this?

The state of Rio abandoned the Plano de Metas (Targets Plan), a results-oriented security policy that remunerated police when they met several key goals. These bonuses stopped being paid because of the economic crisis, and, together with reduced investment in Rio’s Pacifying Police Unit program, this led to a crisis in the policing institution.

The only way to get out of this is if civic leaders in Rio demand that this be put back on track. We can reestablish the Plano de Metas. We can go back to the idea of confrontation being a last resort. Society has to put this back on the agenda, given that the government is involved in so many crises.

How has government corruption affected how everyday Brazilians see the rule of law?

The embezzlement of enormous amounts of money sends the worst signals to criminals, who think that what they’re doing isn’t as bad. It creates the worst role model possible, as well as a big space for more reactionary solutions to security.

The narrative that’s taking advantage of this moment is one of fear and hate, and of taking justice and security into your own hands. That, I truly believe, will lead us to more chaos. Even if it’s difficult, we have to look for a collective solution. The situation is creating the most dangerous political scenario, where the reactionary politics of fear and hate is winning a much bigger space than it should.