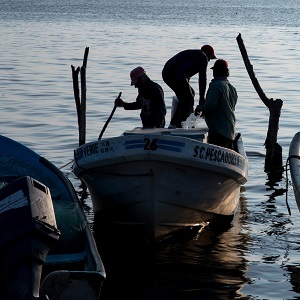 A silent emergency is spreading across Central America and Mexico. Unprecedented numbers of men, women and children are fleeing the region’s violence-plagued cities and towns. They are seeking asylum in neighbouring countries, or are searching for safer ground closer to home. Two main factors are driving this displacement surge: organised violence and deportations.

The sheer scale of population displacement is breathtaking. Hundreds of thousands of people have fled the so-called northern triangle – El Salvador, Guatemala and Honduras – over the past five years. More than 161,000 people from these three countries applied for asylum to the US between 2011-2016. At least 714,000 more are internally displaced.

A significant number of the displaced are using illegal means to move, including human smuggling networks. Many never make it to their intended destination; at least 75,000 people have gone missing from Mexico and northern triangle countries over the past 15 years. Women and girls are especially vulnerable (pdf) to victimisation of all types.

Central Americans and Mexicans have good reason to seek sanctuary. Cities across the region are routinely among the most murderous in the world. The intensity and organisation of violence is staggering: 43 of the 50 most homicidal urban centres on the planet are located in Latin America and the Caribbean.

Several countries in the region have registered more killings and disappearances than some of the world’s most fearsome armed conflicts. Governments are alternately unable and unwilling to protect some of their most vulnerable citizens. Charitable organisations are understandably uneasy, with many of them reluctant to get too closely involved.

Organised violence is not random. In a new study released by the Humanitarian Practice Network, contributors David Cantor and Malte Plewa explain that insecurity in Central America “closely reflects patterns of control and confrontation by organised armed actors … each local gang operates with a large degree of autonomy, using violence to control core territory, impose its will on local inhabitants and carry out extortion”.

The spike in cross-border and internal displacement in the northern triangle is to some extent manufactured in the US. Between 2013 and 2015, the US government authorised the deportation of more than 300,000 Hondurans, Guatemalans and Salvadorans with criminal records, many of them children of refugees from the 1970s and 1980s. Another 550,000 Mexicans were also deportedover the same period.

The return of so many people, many of them convicted felons, coincided with a sharp uptick in criminal violence in Central America and Mexico. The policy of deporting Latin Americans was actually expanded during the Obama administration. For years the returnees have strained local criminal justice and penal systems to breaking point – overcrowded prisons are even referred to as “crime colleges” or “finishing schools for crime”.

The latest research published by the Humanitarian Practice Network reveals how governments across the region have patently failed to prevent or respond to displacement. State responses are frequently limited to goodwill gestures of individual public servants. There is also a palpable mistrust of military, police and criminal justice bodies among locals.

Yet confidence in state institutions is critical for preventing and reducing displacement. As Jan Egeland, secretary general of the Norwegian Refugee Council notes “people must believe that their governments can and will protect them”. He argues that strengthening national legal frameworks to protect the displaced must be a priority, as well as establishing regional consensus to care for people on the move, and scaling-up human and financial resources to improve conditions on the ground.

The good news is that some civil society organisations have stepped up their activities in these countries in recent years. Some have forged partnerships with public defenders’ offices, human rights ombudsmen and social welfare departments to improve victim assistance. However, ensuring access to victims, many of whom experience restricted mobility or are in confinement, is immensely challenging.

Agencies like the International Committee of the Red Cross, Médecins Sans Frontières, the United Nations high commissioner for refugees and the World Health Organization are scaling-up activities across the region. They are helping upgrade national legislation, training police in the use of force, strengthening emergency health services, providing support for victims of sexual violence, ensuring access to legal advice, and much more.

But clearly a wider and more comprehensive level of engagement is required from relief and development organisations. In addition to treating the symptoms of organised violence, they will need to more seriously engage with the causes and consequences of population displacement. This will likely take some organisations into unfamiliar territory.

For one, they will need to challenge militarised approaches to public security provision that are common across the region. They will have to re-evaluate prohibitionist drug policies, including the ways that heavy-handed policing and mass incarceration reproduces violence within and outside jails. Deportation procedures will also need greater scrutiny, along with longer-term investment in preventing recidivism and supporting areas of concentrated disadvantage.

Ultimately, what is needed is greater investment in regional solutions to resolve the displacement crisis. Latin Americans are notoriously reluctant to engage in regional strategies when it comes to migration, but exceptions are essential if countries are to comprehensively address the unfolding catastrophe.

There are already several rhetorical commitments to do more – the 2014 Brazil declaration and plan of action (pdf) and the 2016 San Jose action statement (pdf) stand-out. As a matter of urgency, governments need to support a network of safe houses, provide relief, and open channels for safe evacuation. They also need to ensure a fair and effective asylum procedures if they are to translate noble intentions into deeds.