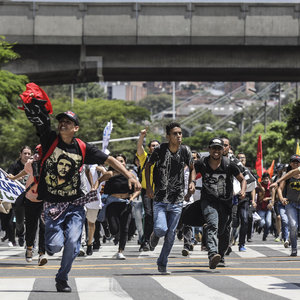 Is Populism Making a Comeback in Latin America?

Predicting the future of Latin American politics is never easy. To paraphrase the 19th-century revolutionary Simón Bolívar, it is akin to plowing the sea. But even a casual glance over the political horizon should set alarm bells ringing. There is a real danger that outsiders with a stake in the region — from diplomats to global investors — are sleepwalking into 2018. Next year could herald the most consequential regional political realignment in a generation.

Nearly two out of three Latin Americans will choose a new leader over the next 12 months. Beginning in November, Chile, Paraguay, Colombia, Mexico, and Brazil and will each hold presidential elections (Venezuelans are also scheduled to vote, although Nicolás Maduro’s dictatorship is highly unlikely to allow a free or fair election). There are another eight Latin American elections scheduled in 2019.

There’s just one problem: It’s impossible to know which way these elections are going to go. At the moment, all of these countries feature pragmatic, moderate candidates at or near the top of the polls. Yet there is a real risk of hard populist turns to the right and the left that could radically change policies toward security, trade, the economy, and Latin America’s relationships with the world — including the United States.

In part, that’s because many foreign observers have gotten used to thinking about populism as a crisis Latin Americans have already overcome. The region experienced a leftist revival during the 2000s — a so-called “pink tide” swept in left-wing presidents from Argentina, Bolivia, Brazil, Chile, Ecuador, and Venezuela to Guatemala, Honduras, and Nicaragua. They benefited greatly from a golden era of high commodity prices and relentless Chinese demand for natural resources. The tide started to turn, both politically and economically, once commodity prices began falling in 2011.

Restored to power, the region’s political moderates have produced positive economic results in recent years. Most of the region’s economies are again growing after six years of crisis. This uptick is admittedly modest — about 1.2 percent expected regional GDP growth in 2017, compared to a projected global average of 3.6 percent. But the sound fiscal policies embraced by several governments have analysts predicting regional growth of around 2 percent in 2018.

There are growing signs of exuberance across the region’s financial markets. Brazil’s stock market traded at record highs in September, up nearly 100 percent from dramatic lows in early 2016. And Mexico’s peso is one of the world’s best-performing currencies this year — and this is after tumbling 15 percent the day after Donald Trump’s election last year.

But just because Latin America’s economies are improving doesn’t mean that liberal policies are here to stay. The specific backdrop for next year’s “election wave” varies from one country to the next. Generally speaking, however, voters are frustrated.

According to the latest polls, faith in democratic politics around Latin America is at historic lows. The proportion of Latin Americans supporting democracy slid from 66 percent in 2014 to roughly 58 percent today, with more than 40 percent saying they are prepared to support a military coup to tackle crime and corruption. Young people are especially disillusioned — roughly 20 million of Latin American 15-29 year olds are unemployed. Many are taking to the streets — and their digital equivalents — to vent their frustrations. The prospect of low-paying jobs is forcing a good number into the informal economy, including crime. Latin America already has 43 of the 50 most murderous cities in the world.

Consider the case of Brazil. The country’s largest companies have been in lockstep with President Michel Temer, who has overseen his country’s limited recovery this year. The country’s GDP — which accounts for 40 percent of total regional GDP – just expanded for the first time in almost three years: 0.6 percent so far in 2017, with projections of 2.2 percent in 2018. Temer’s caps on public spending and proposed entitlement reform are keeping financial markets satiated. An unprecedented, and overdue, corruption probe is also helping the country get its political house in order.

Yet Temer’s popularity ratings are at a rock-bottom 3 percent. This is largely owing to public disgust with far-reaching government corruption scandals and kickback schemes, and the fact that most Brazilians have yet to feel the stirrings of economic recovery. A majority of Brazil’s citizens want to see a shake-up of traditional politics and are suspicious of existing political institutions: Over 70 percent say they care less about the political parties competing for votes than the message of individual candidates, and more than 91 percentbelieve no political party is free of corruption. Almost 60 percent of Brazilians would like to see a president who does not belong to one of the three big parties. The ground is fertile for populists and reactionaries from the left and right.

Brazil’s soaring crime and corruption have fed the popularity of presidential candidate Jair Bolsonaro, a former army captain who at various points in his political career has advocated shutting down the National Congress and restoring military rule. Modeling himself on U.S. President Donald Trump, he has also long been a staunch advocate of protectionist economic policies (though he has more recently attempted to portray himself as an advocate of open markets), looser gun laws, and repressive approaches to public security. Bolsonaro is currently running second in most polls for 2018, with a strong chance of making a runoff and even potentially winning it all.

The road ahead for Latin America’s other economic giant, Mexico, is also rocky. The country’s GDP grew by 2.1 percent in 2016, largely due to growing trade in manufactured goods with the United States. But, given the complex NAFTA negotiations that started in August at the insistence of Trump, nobody knows how sustainable that trade is — perhaps not even Trump. The future of NAFTA looks more uncertain than ever, and this is bad news for Mexico and the wider region.

What’s clear is that the war of words between Mexico City and Washington has soured Mexico’s public mood and reduced the political space for cooperation. If pushed too far, Mexican voters may well prioritize domestic pride over economic probity. The political fortunes of Andrés Manuel López Obrador, a former mayor of Mexico City and a leftist nationalist, are rising. After two failed presidential runs in 2006 and 2012, AMLO, as he is known, is at the top of most polls for 2018. There is a real possibility López Obrador will be elected, initiating a hard left turn in Mexico. The political uncertainty already has some investment banks betting against the peso.

Meanwhile, Colombia’s political landscape is getting more unstable. Many Colombians are upset with the government of President Juan Manuel Santos, despite the fact that it put an end to the country’s 52-year-long civil conflict. Some feel that the terms of the peace deal were too lenient on the Revolutionary Armed Forces of Colombia, or FARC. A recent poll showed just 12 percent of Colombians had a favorable view of the ex-guerrillas, while 84 percent disapproved. (In a bid to soften its image and pave the way to electoral respectability, the group just changed its name to the Common Alternative Revolutionary Force.)

Right now, Colombia’s former Vice President Germán Vargas Lleras and ex-mayor of Bogota Gustavo Petro lead in the polls. But there are real headwinds facing Vargas Lleras. Colombians disapprove of traditional parties even more than they do of the FARC, and the public disapproves of the government Vargas Lleras served in from 2014-2017 by a factor of 2:1. The forces of the far right, including their standard-bearer, former President Álvaro Uribe (who served from 2002 to 2010), are also gathering force. There are rumors that Uribe could support Vargas Lleras in a second round, though it’s not clear what the terms of such a deal might be.

In the meantime, Venezuela is in meltdown, and it is hard to imagine how things could get worse. The country is suffering from a raging epidemic of violence and inflation that could hit 2,300 percent next year. To be sure, the contagion effects of its political and economic collapse are already being felt across the region. But in the case of Venezuela, most foreign diplomats have at least recognized the negative trajectory, and markets have for the most part already internalized the risks. It’s not clear that the United States will do much more than saber rattle, and Latin American governments have not shown much appetite to engage. No one is holding their breath that elections will take place next year.

Argentina shows that a more moderate path is possible. The economy looks set to expand by 2.8 percent in 2017. Industrial production and consumer confidence are up, while business-friendly reforms pushed by President Mauricio Macri are improving investment and household spending. Not all is well — inflation and unemployment remain high. But overall, and in spite of simmering domestic frustration, the early results generated by Macri show a pragmatic approach to governance can appeal to voters.

Taking the long view, Latin America has experienced general improvements over the past few decades. While social and economic progress — especially poverty reduction and job creation for the region’s 163 million young people — recently slowed, the overall trends are positive. More recently, inflation has curbed and now hovers at around 8.3 percent — some Latin American countries have lower inflation than the United States. International reserves have also increased and sovereign risks have decreased.

The big question for Latin America in 2018 is whether voters also take this more constructive long view? Or will they embrace the populist anger and nationalist pride that seems to be sweeping much of the world? It’s impossible to know at this point, but the stakes are clearly huge. Policymakers and investors in Washington and elsewhere would do well to pay much closer attention.