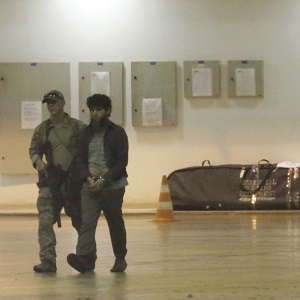 Harsh Sentences for IS Sympathizers in Brazil Test New Law

“I want to be clear,” he wrote in a message recovered by Brazilian authorities on the eve of the Rio 2016 Olympics. “My intention is to put together a real and concrete group” to launch attacks.

While de Melo’s defenders portray that message as a bit of social media bravado, it alarmed Brazilian officials worried that the global Games could prove a target for terrorists. De Melo and 12 other men were detained in July during a high-profile sweep under a new law that greatly widened the scope of what could be considered terrorism in Latin America’s largest nation.

This month, he and seven other of the men were sentenced to prison terms ranging from 6 years to nearly 16 for de Melo, labelled by authorities as the group’s leader.

The first — and so far only — use of the law has been controversial in Brazil, a nation that has never suffered a known Islamist terror attack and in a broader region where they have been extremely rare.

Former Public Security Secretary Jose Vicente da Silva said the quick reaction of officials “was the only thing that could stop such a crime,” and said the sentence was justified given the threat the men posed.

But others suggested the law goes too far.

“The sentences appear to be exceedingly harsh given what is known about the would-be plotters,” said Robert Muggah, research director at Igarape Institute, a Rio-based think tank that has a specialty in crime analysis.

When Congress passed the anti-terrorism law in 2016, Brazilian authorities were under enormous pressure to show they could handle security risks during the Games, particularly amid a spate of “lone-wolf” attacks in Europe and the United States by radicalized young men claiming allegiance to — but with few prior contacts with — the Islamic State.

Many Brazilians saw little need for such a law: The country of 200 million people has seen little open friction involving its 1.5 million Muslim citizens. In recent decades, intelligence agencies have expressed concerns about possible terrorism activity in Brazil’s triple border area with Paraguay and Argentina, but residents there wave aside the concerns, saying the region is simply a melting pot of cultures.

The country accounted for only three of the tens of thousands of foreign fighters for the Islamic State group counted in a 2015 study by the Soufan Group, a private intelligence firm.

A more visceral worry for many was possible misuse of anti-terror laws in a country and region that suffered through oppressive conservative dictatorships that killed thousands of South Americans. Human rights groups warned that overly broad language could provide tools to suppress free speech.

The law calls for up to eight years in prison for “advocating terrorism,” and 10 to 20 years for “joining terrorist organizations,” though “terrorism” and “terrorist” are not defined.

In his sentence, federal judge Marcos Josegrei da Silva noted that the men never began planning an attack, but said that “it doesn’t matter if there really was any intent to translate public declarations of support into preparations or concrete actions.”

Still, many doubt the men, most recent converts to Islam, posed much of a threat. Some had visited the Middle East, though authorities have not accused them of making connections with terror groups abroad.

The men range in age from 21 to 42, come from different regions of Brazil and have varying levels of education and work experience.

De Melo, a former auto mechanic, had served 13 years in prison for first-degree murder in an unrelated case. Israel Pedra Mesquita, 27, was a chicken farmer. Levi Ribeiro Fernandes de Jesus, 22, worked as a telemarketer and then at a supermarket. Hortencio Yoshitake, 30, received about $1,000 a month from his mother, who lived in Japan.

“I’m still learning,” Yoshitake told the judge when unable to answer basic questions about Islam, according to the sentence.

When the group was arrested, Brazil’s then-justice minister, Alexandre Moraes, said some had pledged allegiance to the Islamic State online, but none had personal contact with members of the terrorist group abroad.

The men had never met in person and communicated with each other via messaging apps WhatsApp and Telegram. Moraes called them “amateurs” and “ill-prepared.” Officials said they found no mention of specific targets, let alone attempts to plan for attacks on them.

Still, De Melo clearly had big and damaging dreams, according to the judge’s sentence. He called for the men to join him to create a jihadist training camp on the border with Bolivia. From there, he wrote, the men could raise money — he thought roughly $300 each would do — to send fighters to “the caliphate,” the stretch of Syria and Iraq that IS followers regard as their holy territory.

“I’m tired of fighting with my tongue,” he wrote.

An attack against non-Muslims “would put us in the history books,” he wrote.

One of the men tried to buy an AK-47 assault rifle from a store in Paraguay in 2015, when communications had just started among a few of them.

Rita Cristina de Oliveira, a defense attorney for three of the men, told The Associated Press in a statement said she would appeal. “Unfortunately the sentence tries to legitimize this investigation with its exaggerations and justify the long prison terms,” she said.

One of the defendants, Valdir Pereira da Rocha, was beaten to death while being held in prison on a separate charge. The Mato Grosso state justice department said he had been killed because fellow inmates learned he was deemed a “terrorist.”

De Melo is in his second month of a hunger strike, according to his mother and lawyer, Zaine el Kadri. She said he’s protesting conditions that include 20 hours a day in solitary confinement and rancid food.

“He’s not on strike to call attention to himself,” said El Kadri of her son. “He would rather (die) than face yet another unjust conviction.”