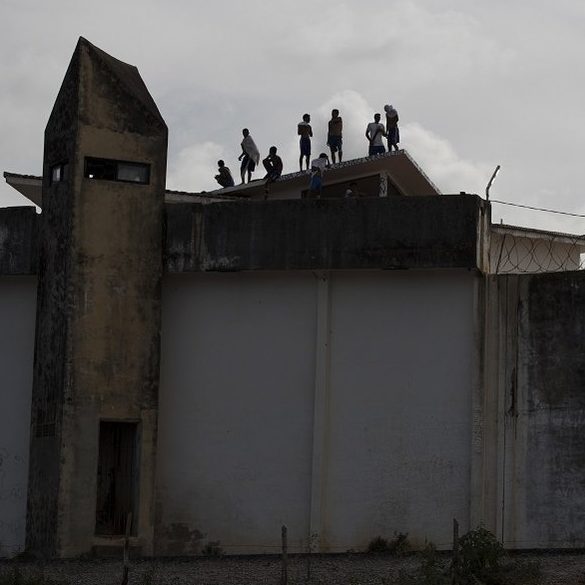 Authorities are struggling to contain deadly clashes between rival gangs in prison, which threaten to ignite more violence on the street. Long-term, the Brazilian government will have to revisit its “lock them up” policy and build political support to address overcrowding.

After a turbulent 2016, Brazil kicked off the New Year with yet another crisis, this time in its penal system. Deadly prison riots broke out on Jan. 1 and lasted for most of the month, leaving more than 120 inmates dead and hundreds escaped.

The bloodletting signals a rift in a long-held gang alliance, and underscores the power criminal gangs hold not just inside prison walls, but outside. Some are now concerned that the uptick in prison violence could signal more violence to come in the streets.

The violence is generating harsh criticism over what most view as an already dysfunctional prison system, so dominated by powerful gangs that authorities have almost no control. The government is trying to keep violence at bay. But long-term solutions may remain elusive unless the government addresses two underlying challenges: a “lock them up” policy, not unlike the crackdown in the United States, which has led to severe overcrowding, and a cultural disdain, bordering on dehumanization, that undercuts political support for prison reform.

Absent fundamental change, the riots threaten to light a tinderbox.

“If the basic peace between [Brazil’s two main rival gangs] is coming apart and there’s a real nation-wide gang war, we could see violence on a scale that we’ve never seen,” says Benjamin Lessing, a University of Chicago professor who studies criminal conflict in the Americas.

Two rival gangs from São Paulo and Rio de Janeiro states are behind the recent prison violence, signaling a rift in a nearly 23-year-old truce. In the past, each gang, The First Capital Command (PCC) and the Red Command (CV), has focused on different elements of the drug trade. But as they have expanded throughout Brazil, creating alliances with other criminal groups and gaining more power within prisons, tensions are flaring up.

“The control [of the drug trade] is as much inside the prisons as it is outside,” says Robert Muggah, co-founder of Igarapé Institute, a Rio-based think tank.

Lethal fighting between Brazil’s two most powerful gangs began at the end of 2016 and exploded Jan. 1 when a 17-hour prison riot in the Amazonian city of Manaus saw hostages, beheadings, and a total of 56 deaths.

Less than a week later, a riot in a jail in the state of Roraima, also located in the Amazon Basin, resulted in 31 deaths. On Jan. 14, there was a 14-hour rebellion, resulting in 26 deaths at a state prison on the northeastern coast in Rio Grande do Norte state. And closing out the month, inmates in a São Paulo prison set mattresses ablaze and facilitated the escape of 152 inmates.

In many prisons the state is largely absent, creating space for drug gangs to take control. Brazil has the world’s fourth-largest prison population, with more than 600,000 inmates. Its reliance on mass incarceration has strengthened gang power in and outside prison walls, experts say.

In poor neighborhoods, for example, where going to prison is so common it’s almost an expectation, there’s an incentive to join a gang: Inside prisons, gangs provide security and protection. And jails are often separated by gang affiliation, so offenders who are not part of the drug trade often end up joining while behind bars for survival.

“They recruit new soldiers to fight wars outside prison, they get more powerful by the day from this,” says Julita Lemgruber, former general director of the Rio de Janeiro State Penitentiary System. She says that despite the understanding that gangs are operating within prisons, segregating them by affiliation is a matter of saving prisoner lives.

“[T]he very least you can do is make sure they don’t kill each other,” Ms. Lemgruber says.

Gangs often step in to provide basic services that the state is meant to provide. This gives them even more power and influence, says Mr. Muggah. “Gang members are regularly offering products — from food, soap, and toothbrushes, to alcohol, drugs, and prostitutes, including on credit.”

Prison conditions are frequently characterized as barbaric, with structural decay and overcrowding. The Anisio Jobim prison complex in Manaus, where the New Year’s Day riot occurred, was privatized in 2015, and though it has the capacity for 590 inmates, on the day of the riot it housed 2,230 prisoners.

A former inmate at a state prison in Minas Gerais state, Marcelo Augusto da Silva Feitosa, who was sentenced for drug trafficking, scoffs when asked if he had his own bed.

“There were 33 people in my cell,” he says. “I slept on the floor. We were treated like dogs.” Mr. Feitosa spent nine months in prison before getting transferred to a prison that implements restorative justice techniques including therapy, access to education, and work opportunities.

The only way Brazil can prevent a “bloody, national-scale gang war,” is to “craft a better prison strategy,” says Mr. Lessing of the University of Chicago. Focusing first on tamping out violence within prisons to make sure all-out war doesn’t break out, however, is key.

The National Penitentiary Department says it’s rolling out a new national security plan. This includes more federal funding for prisons, creating a task force to intervene in emergency situations, and isolating gang leaders in federal prisons. It will also include structural reform to enforce prisoners’ rights, including the right to legal defense, education, healthcare, and work.

The government also pointed out that it’s putting federal funds toward building more prison facilities, in an effort to alleviate overcrowding, as well as amplifying the use of house arrest. However, analysts say an important first step is to reduce the number of pretrial inmates, who currently make up 40 percent of the prison population.

Despite the new promises and increased funds, Lemgruber questions the effectiveness of these policies. The existing laws guiding prison oversight are quite thorough, she says, but simply aren’t enforced. “Society couldn’t care less for those who are in prison,” she says. “They are the ones who can be discarded.”

A 2016 poll on public security found that 57 percent of Brazilians agree that “a good criminal is a dead criminal,” — a common phrase here.

“The state just wants to throw us away like trash there,” Mr. Feitosa, the former inmate, says.