“When Kids Call the Shots” Testing a Child Security Index in Recife, Brazil 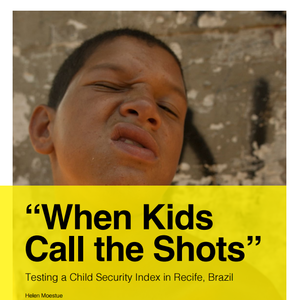 This Strategic Paper describes the first pilot study of the Child Security Index (CSI) and its usage as an open source application to capture children’s perceptions on violence. The app was tested in hot spot neighborhoods in Recife, capital city of Pernambuco state in Brazil. The surveycollected data showed that the gender and age of respondents were more important explanatory factors than location. Younger children in particular reported lower levels of insecurity in comparison to “When Kids Call the Shots” Testing a Child Security Index in Recife, Brazil adolescents and adults. Gender-based differences regarding perceived levels of insecurity in certain spaces, especially public venues, were also noted among teens, with girls expressing more fear of outside spaces than boys. The experience in Recife demonstrated that the CSI as a digital survey app can be used as a rapid security assessment technology which can also be adapted to other research questions and contexts.