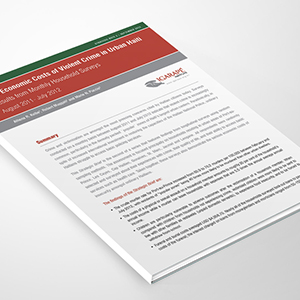 The Economic Costs of Violent Crime in Urban Haiti

Crime and victimization are amongst the most pressing concerns cited by Haitian citizens today. Surveys conducted on a monthly basis between August 2011 and July 2012 indicate that violent crime is increasingly common, particularly in the densely packed “popular” zones of Haiti’s largest urban centers. Paradoxically, in spite of increased international investment in restoring the capacities of the Haitian National Police, ordinary Haitians struggle to access basic policing services. This Strategic Brief is the second of a series that features findings from longitudinal surveys using random sampling methods. The assessment is focused principally on households residing in urban areas of Port-auPrince, Les Cayes, Cap Haitien, Gonaives, St. Marc, Jacmel and Leogane. All respondents were randomly selected and surveyed about their experiences with crime, their quality of life, and their ability to access basic services such as health care. Taken together, these surveys also demonstrate the serious economic costs of insecurity amongst ordinary Haitians.