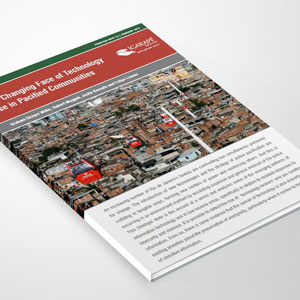 The Changing Face of Technology Use in Pacified Communities

An increasing number of Rio de Janeiro’s favelas are confronting two simultaneous pressures for change. The introduction of new technologies and the strategy of police pacification are colliding in tangible ways, forming new centers of power and reinforcing others. And this is occurring in an environment marked by escalating suspicion and general mistrust of the police. This Strategic Note is the second of a series and analyzes some of the emerging patterns of information technology use in low-income areas, specifically in relation to resident responses to insecurity and violence. It is possible to detect the rise of ‘technology brokers’ who are curating information. Even so, there is some evidence that the spread of technology is also exacerbating existing anxieties about the preservation of anonymity, particularly when it comes to the sharing of sensitive information.