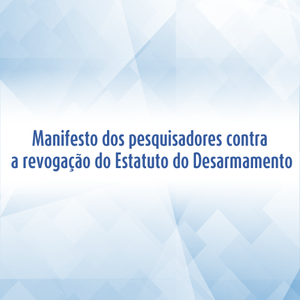 Researchers’ manifesto in support of the Disarmament Statute

We are researchers from public and private universities and research institutions across Brazil and around the world. Our goal is to highlight the scientific evidence associated with the Disarmament Statute. Studies on the relationships between the Statute and lethal violence are available in peer-reviewed journals, book chapters, and doctoral theses, a sample of which is listed in the Annex. Among other things, these studies refute the hypothesis that “more guns in circulation cause a reduction in lethal gun violence.”

The preparation of a manifesto to preserve the Disarmament Statute comes at an important moment. A Special Committee of the Brazilian House of Representatives is deliberating over Bill 3722/12 which seeks to revoke the Disarmament Statute. The Bill would reduce the minimum age for buying firearms from 25 to 21. Among other things, it would authorize individuals under police investigation or facing criminal charges to own and carry firearms, including those being prosecuted for murder.

We have a moral duty to inform the public about the findings of rigourous scientific studies that demonstrate the outcomes of the Disarmament Statute. As professional scholars, we are committed to fostering serious and objective debate. Unfortunately, some politicians in the House render life and death decisions without consulting scientific evidence. The relaxation of existing firearms regulation legislation will almost certainly lead to more deaths and greater insecurity in Brazil.

There is popular support for Bill 3722/12 owing to the considerable sense of insecurity among many Brazilians. Some believe that access to firearms could improve their personal and family safety. It is important to recall that violence is a complex phenomenon. A wide range of variables shapes its prevalence, including inter alia income and social inequality, unemployment, education, institutional impunity, and funding for public security.

Research undertaken by international and Brazilian academics demonstrates that the number of weapons in circulation is strongly associated with higher rates of lethal gun violence. When controlling for the abovementioned variables, scientific studies detect robust statistical relationships between the increased access and circulation of firearms and increases in firearm-related homicide. These findings are confirmed in Brazil and other countries.

It is important that Brazilian society be aware of the available evidence linking increased circulation of firearms with more gun violence. Misguided and ineffective policy emerges in Brazil and other countries when laws are formed without resort to scientific knowledge. Representatives of Congress would do well to consider the available evidence, including the sample of scientific studies cited in the Annex, before they decide to expand ownership and possession of firearms in Brazil.