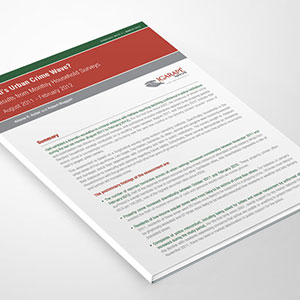 Haiti exhibited a dramatic escalation in criminal violence with Haitians reporting declining confidence in police institutions during the last six months (August 2011 to February 2012). For the first time since 2007, the incidence of violent crime and victimization has shown a consistent increase, and confidence in public institutions appears to be dropping quickly. Random household surveys conducted on a monthly basis between August 2011 and February 2012 indicate that violent crime is increasingly common, particularly over the past few months in the densely packed ‘popular’ zones of Haiti’s largest urban centers. This assessment is based on a longitudinal survey using random sampling methods. Specifically, households in the urban areas of Port-au-Prince, Les Cayes, Cap Haitien, Gonaives, St. Marc, Jacmel and Leogane were randomly selected and surveyed about their experiences with criminality and faith in public institutions. The survey sought to measure their exposure to insecurity and opinions regarding future safety. Collectively, these surveys demonstrate an increasing dissatisfaction with the government of Haiti after five years of growing confidence as well as fears that political uncertainty and turmoil will increase crime.