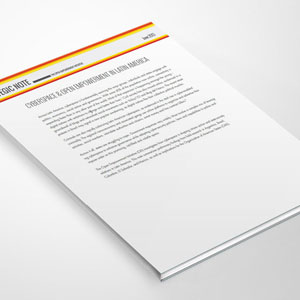 June, 2013: Across Latin America, cyberspace is fundamentally rewiring the ways groups, individuals and states engage with politics, economics, social action and governance. With some 40% of the population now online, connectivity is expanding faster than in any other part of the world. Most of that expansion is happening amongst the young – digital natives with ambitions to change and better their lives. Civil society has also moved online, evidenced in a groundswell of blogs and networked social movements such as YoSoy132 and Blog del Narco. The recent street protests in Brazil may signal a new popular awakening, as digital natives flex their collective political muscles.

This Strategic Note show that criminals are also rapidly colonizing Latin American cyberspace, as evidenced in the stark rise in cyber-enabled criminality. The regional narco-economy and associated gangs use online platforms to organize and advertise their activities, recruit members, intimidate authorities and citizens, extort money and hire contract killers.

Across it all, states are struggling to cope. Government responses vary widely. Most involve a complex mix of leveraging cyberspace to enhance governance while adopting cyber-security policies, laws and capabilities to police and impose order on this promising, risk-filled and volatile space.

The Open Empowerment Initiative (OEI) investigates how cyberspace is shaping citizen action and state-society relations in Latin America. This note summarizes preliminary findings from field research in Argentina, Brazil, Colombia, El Salvador, and Mexico, as well as implications for the Organization of American States (OAS).