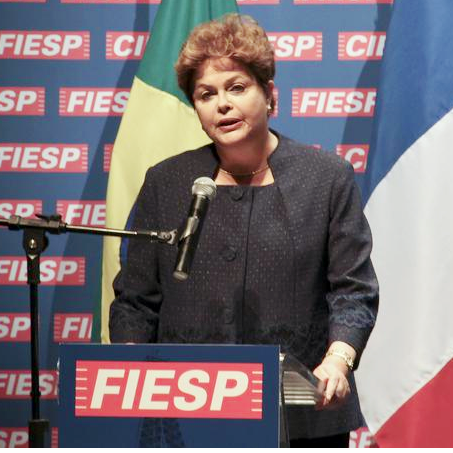 Brazil could play a critical role in promoting stability in an uncertain world. But no.

If ever there was a good time for Brazil to assume more global responsibility in foreign affairs now would be it. Dangerous armed conflicts, health pandemics and climate change warrant assertive engagement from the world´s major players, including South America´s powerhouse. Brazil could play a critical role in promoting stability in an uncertain world. Worryingly, the country is nowhere to be seen.

Brazilian foreign policy is in the dark. Part of the problem is that its leaders are distracted. This is maybe not altogether surprising: the country’s economy is in the doldrums. Brazil’ new finance minister, Joaquim Levy, described Brazil´s economic prospects in 2015 as “almost flat”. Brazil is now one of the Fragile Five, alongside Indonesia, Russia, South Africa and Turkey. Unprecedented bribery scandals involving the national oil company, Petrobras, and a host of construction firms, will likely tip the already damaged economy into a recession.

Some Brazilian commentators resist a more activist foreign policy. They are understandably preoccupied with making critical reforms at home to increase productivity and competitiveness rather than promoting Brazilian interests abroad. But this is a false choice: domestic reform should not come at the expense of foreign policy. On the contrary. Brazil urgently needs to bolster its strategic interests in its own neighborhood and beyond.

What a difference half a decade makes. Under the leadership of former President Luiz Inácio Lula da Silva and then Foreign Minister Celso Amorim (2003-2010), Brazil saw its fortunes swell. Lula and his team placed a premium on expanding the country´s diplomatic presence, trade engagements and development cooperation. Brazil´s expanded global role offered an important – and at times dissenting – new voice to international discussions of peace and security.

If Lula’s administration comprised the Golden era of foreign policy, then the current President Dilma Rousseff´s (2011-present) is the Stone Age. Brazil’s profile is waning. Dilma has little patience for international affairs, prioritizing domestic poverty reduction and infrastructure expansion instead. The Foreign Ministry, once Latin America’s most esteemed, has fallen on hard times since Brazil now spends a paltry 0.2% of its national budget on foreign policy.

Of course, today´s world is more uncertain than that of ten years ago. It is not possible to directly compare the administrations of Lula and his protégé, Dilma. Yet even amid a global recession in 2008, Brazil still managed to thrive. Since 2011, however, the country has shifted into reverse. Diplomatic ventures to ‘sell Brazil’ shrunk from 180 in 2013 to just 40 in 2014. In contrast to her predecessor, Dilma made just a handful of foreign visits during her first term.

The Dilma administration has not only shied away from global debates: it has actively dismantled the Lula legacy. This includes stepping back from fleeting engagement in the Middle East – whether in Iran, Palestine, Iran or Syria. Brazil has also been conspicuously silent on Russian support for separatists in Ukraine. The country has also shirked leadership roles in the United Nations and the Security Council, a mainstay of the country´s foreign policy. In the process, the President has slashed the foreign ministry budget from $3.3 billion in 2010 to around $1.1 billion today.

Long considered a good global citizen, Brazil’s leadership now skips out on agenda-setting events like the G20 summit and the World Economic Forum last month. Remarkably, Brazil also virtually stopped paying United Nations dues, now estimated at more than $258 million and growing. Brazil is no longer eligible to vote on crucial decisions, including in the International Criminal Court or with the International Atomic Energy Agency.

The negligence of foreign policy is showing. Brazilian embassies and consulates in Canada, but also Guinea, Japan, Paraguay, Portugal and the US cannot pay their water and electricity bills. In Benin, the embassy has just $83 dollars in the cash box, with staff forced to stay at home to avoid malaria-bearing mosquitoes. Astonishingly, Brazil’s diplomatic missions were ordered to cut their spending in half in early 2015, including on internet and security services and local staff.

This is hardly the stuff of inspired and forward-looking foreign policy. Brazil traditionally supported a robust multilateral order. It actively stood up against wealthy countries on behalf of poorer underdeveloped ones. The country’s diplomats were characterized as among the world´s finest. Today, many of them are demoralized and making for the exit. During a diplomatic spat with Israel in 2014, Brazil was described memorably as a “diplomatic dwarf”. The claim is uncomfortably close to the mark.

Foreign policy is accorded a low priority in all countries, not least Brazil. There are clearly many social and economic challenges on the domestic front. According to some diplomats Brazilians are naturally inward-looking. Geography may play a role: the closest border to the country´s two most populous cities, Sao Paulo and Rio de Janeiro, is more than 2,000 kilometers away. Most Brazilians have no idea how foreign policy affects their lives and it seldom wins votes at the ballot box. Yet it is precisely to expand opportunities at home and abroad that Brazil needs to step up its game internationally. But rather than strengthening the Foreign Ministry, the President’s office appears to be weakening it instead.

All of this spells bad news for Brazil and its allies. Brazil’s influence in global affairs – from pressing for the reform of the Bretton Woods institutions to Internet freedom – is largely positive. The country´s long-standing commitment to preventing conflict and building peace is needed now more than ever. The country’s constructive criticism of western unilateralism is also important in these uncertain times. Brazil’s retreat at a time of global instability is cause for concern not just in Brazil, but around the world. If the country is to recover its political and economic reputation, a strong foreign service is essential.