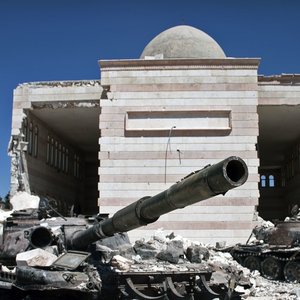 Last night’s Question Time panel followed the House of Commons in debating Syria and whether Britain should be bombing there; the big government’s big economic announcement this week; and how the NHS is doing.

The NHS is safe with us?

“What Britain has seen is a serious drop in the quality of healthcare…not compared to America or Singapore, but compared to its neighbours [mentions Germany, Switzerland, France]”—Kate Andrews

It’s very difficult, and depends on what you think a “good” system looks like. In a blog earlier this year, Kate Andrews wrote that she prefers the European Health Consumer Index, which ranked England 14th after Germany, Switzerland and France.

Earlier this month we pointed to seemingly contradictory conclusions from two reports. One from the Commonwealth Fund put the UK’s healthcare system top out of eleven countries, while another by the OECD said that quality in the UK “continues to lag behind that in many other OECD countries”.

No matter which measures are used, it’s always going to be difficult to say that one health system is better than another. As the Nuffield Trust and Health Foundation say:

“Despite continuous improvements in the quality of the OECD data and indicators, we have to guard against making oversimplified statements, for example that the quality of care is either good or bad in one country or another. As we have noted many times before, quality is difficult to measure and the indicators we have only capture very specific aspects of care – not the totality.”

“Simply not true. For the first time in a very long time under Tony Blair’s government it was the only time in recent history where the gap between rich and poor narrowed.”—Matt Forde

We’re trying to contact Matt Forde and Ken Livingstone to find out what measures they are using.

Over the whole of Blair’s period in office (1996/97 to 2006/07), the very lowest part of the income distribution saw their incomes (adjusted for inflation) fall and the very top saw their incomes grow, according to the Institute for Fiscal Studies.

So, on this basis it’s not correct to say that “everybody else struggled” under Blair.

The IFS found that the Gini coefficient (a measure of inequality) rose from 0.33 in 1996/97 to 0.35 in 2006/07—a small but statistically significant increase. Looking at a few measures, the IFS found that inequality rose in the late 1990s, fell in the early 2000s and rose again in the last two or so years of Blair’s period in office.

This was a smaller rise than that seen during Margaret Thatcher’s time in government (when it rose from 0.25 to 0.34), but not compared to John Major’s government where inequality by this measure fell slightly (from 0.34 to 0.33). 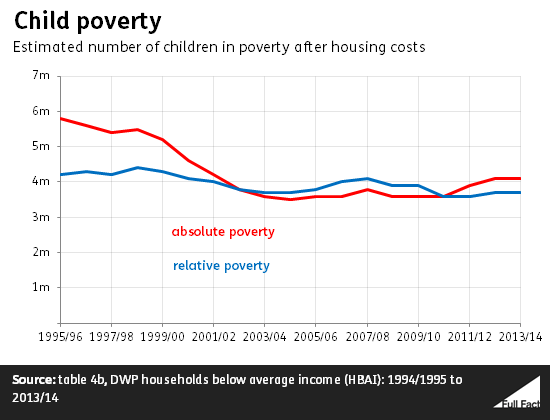 More detail on relative and absolute poverty is available in our explainer.

“We should have invested in modernising our manufacturing like Germany did, we’ve seen 6 million jobs lost.”—Ken Livingstone

The claim about jobs lost isn’t correct. In June 1980, there were 6.4 millionjobs in manufacturing in the UK. In June this year, there were 2.6 million; a fall of 3.8 million.

We’ve contacted the Labour Party to ask for Mr Livingstone’s details, so that we can clarify his claim.

“A quarter of a million people killed in Syria; 11 million people are homeless – it’s the biggest refugee crisis that we’ve seen in modern time”—Pete Wishart

The President of the United Nations Security Council said in August that in the Syrian crisis “at least 250,000 have been killed, including well over 10,000 children, and 12 million people have been forced to flee their homes”.

Another UN agency gives the number of people leaving their home in Syria asunder 11 million as of October.

During wartime such estimates are difficult. In addition, the figures for the ‘internally displaced’ population, which are snapshots at a given point in time,can increase and decrease—so different estimates might be equally valid for the time they were made.

And as Dr Robert Muggah has pointed out, there are also different figures given for the number of deaths in the Syrian conflict, as counts can get varying results depending on how they’re carried out.

The Department for International Development gives a figure of £1.1 billion for humanitarian aid either provided or committed for the Syrian crisis since 2012. Not all this money has been spent yet, so it makes sense to say “set aside”.

About half is earmarked for projects within Syria, with the rest to be spent in nearby countries.

The government indicated that it would increase aid spending for the Syrian crisis in the Spending Review on 25 November, as well as spending £460 million from the aid budget to resettle 20,000 Syrian refugees in the UK.

The United Nations separately records roughly £1 billion ($1.5 billion) for the UK’s contribution to “total funding (appeal and non-appeal) to the Syria crisis” over the past four years. Again, this is counting both money spent and money committed.