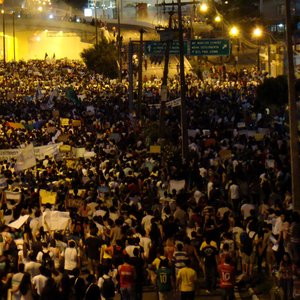 A São Paulo judge sent shock waves across Brazil last month with a ruling that required Brazilian telecommunications operators to block the use of the instant messaging platform WhatsApp for 48 hours. Less than 13 hours later, another São Paulo judge reversed the decision, restoring service. But in the meantime, as many as 100 million Brazilians had been seriously inconvenienced, and civil libertarians around the world looked on with dismay.

Brazilians take their social media very seriously. The country has one of the fastest growing populations of Internet users in the world. Online tools like Facebook, Twitter and WhatsApp are used not only to express opinions; they are an affordable alternative to exorbitantly priced Brazilian telecom providers. One recent study in Brazil found that WhatsApp was used by 93 percent of those surveyed who had Internet access.

The official reason for the judge’s decision to suspend WhatsApp was because its parent company, Facebook, refused to comply with requests to provide personal information and communications records to prosecutors in an investigation into organized crime and drug trafficking. This is not the first time that the Brazilian authorities have jousted with tech companies. Notwithstanding the seriousness of the crimes being investigated, the judge’s action was reckless and represents a potentially longer-term threat to the freedoms of Brazilians.

The ruling was not entirely out of the blue. Brazil’s Congress has been considering legislation that would roll back key provisions of the country’s freshly minted digital bill of rights, known as the Marco Civil da Internet, which was passed in 2014. The new proposal is expected to make it easier for prosecutors to access citizens’ personal information without the nuisance of having to obtain a court order.

Described by critics as “the big spy bill,” it would require Brazilians to register personal details like their home address, telephone number and other private information when accessing websites. It would also expose citizens to possible charges of libel for comments made on social media. At a time when political dissent is vigorous, this bill would surely chill debate.

A key architect of the spy bill is the president of Brazil’s lower house of Congress, Eduardo Cunha. Mr. Cunha was a leading opponent of the Marco Civil and teamed up with the Congress’s evangelical caucus to take it down. Complicating matters, Mr. Cunha is under federal police investigation for corruption and taking bribes, charges he vehemently denies. That aside, groups like the Center for Technology and Society, a think tank based at the Fundação Getulio Vargas law school, argue that the proposed legislation is probably unconstitutional.

These latest efforts to reduce Brazilians’ digital rights are in stark contrast to the country’s former reputation as a champion of Internet freedom. In the wake of scandals over the United States’ National Security Agency’scollection of Brazilian citizens’ communications and phone-tapping of top government officials in 2013, Brazil’s president, Dilma Rousseff, projected the digital freedom agenda onto the global stage — even raising the issue at the United Nations.

When Brazilian legislators passed the Marco Civil, the government signaled to its citizens and the international community that it took “net neutrality” and digital sovereignty seriously. It was, in effect, declaring that the democratic principles of freedom, privacy and human rights were equally applicable in cyberspace as in the physical world.

That ethos continued in 2014, when Brazil hosted the NETmundial, an Internet governance conference. And just a few months ago, Brazil played host to the Internet Governance Forum, showcasing its “multi-stakeholder approach” as a model for other countries.

Although WhatsApp was soon back online, the damage was done. Brazil’s aspirations to Internet freedom have come into clear conflict with the authorities’ plans to expand the digital surveillance state. And while Brazil boasts on the global stage of its open Internet, it is progressivelymilitarizing its cybersecurity and defense infrastructure.

Consider the response of the authorities to the huge street protests of 2013: The Brazilian Intelligence Agency and the Army’s cybersecurity command actively monitored civilian protesters and politicians. And the government now regularly clashes with tech companies like Apple and Google over access to users’ personal data. Every government deals with similar tensions, but each must strive to strike a balance between protecting civil liberties on one hand, and the possible overreach of a country’s security apparatus on the other.

Having emerged from authoritarian rule just 30 years ago, Brazilians are especially sensitive to encroachments on their basic freedoms, including digital ones. People still remember, for example, how habeas corpus was suspended in the wake of the 1964 military coup. Brazil’s politicians and judges should be more conscious than most of the slippery slope of curbing fundamental rights.

Last month’s judicial injunction, together with retrograde proposals like the spy bill, set a dangerous precedent. For a while, the country looked to be a progressive voice for digital freedom. No one expected Brazil to become a leader in cyber surveillance and censorship.