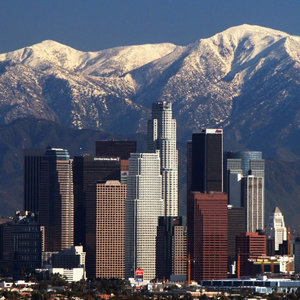 A city held hostage: how the LA bomb threat exposed our urban vulnerability

This week, New York and LA reacted very differently to the same bomb scare. So how does a city judge how seriously to take such threats – and is it really that easy to bring a major metropolis to a halt?

A handful of shoddily written emails spread shock waves across the US last week. The threats were familiar, warning of gunfire, backpack bombs and mayhem in New York and Los Angeles schools. Sent at 1.20am EST, the messages were routed electronically through Germany, though the author’s whereabouts are still unknown.

The two cities responded in dramatically opposing fashion. The Los Angeles Unified School District shut down more than 1,000 facilities, preventing over 640,000 children from attending class. Officials searched 1,500 buildings and police patrols were expanded throughout the week. The price tag was estimated at $29m, but could cost much more.

New York, on the other hand, swiftly dismissed the threats as a hoax. Their assessment was made possible by the city’s massive investments in counter-terrorism capabilities following 9/11. The tough-talking chief of police, William Bratton, suggested the sender had indulged in too many episodes of Homeland.

Though called out by New York’s mayor for overreacting, LA can hardly be faulted for taking the terrorist threat seriously – it came on the heels of this month’s massacre of 14 people in San Bernardino, less than 50 miles from LA, and counter-terrorism experts have been expecting attacks for months.

Nevertheless, the jittery reaction seemed to reveal a chink in our cities’ armour – a vulnerability not just to terror attacks, but to the mere threat of such attacks. Post-Paris, the sense of unease is pervasive. US Homeland Security regularly issues alerts – including last week’s warning of “self-radicalised actors who could strike with little or no notice” – that come without any specific information. There are dozens of warnings a day. Law enforcement agencies are bogged down. And the probability of actual attacks seems to be growing.

Which means that, pranksters or not, terrorists are inflicting real costs, both in terms of life and money, on our cities – which is of course the point. In other words, our increasingly panicky reaction to terror threats mean you can inflict a degree of damage on a city at the click of a mouse. It’s no surprise, then, that there has been a 158% increase in the number of threats to US schools in 2014. More than a third of these were sent electronically. Many resulted in evacuations and shutdowns.

“The goal is to shut [cities] down for as long as possible, separate people from one another, break down communities, and push them into mental fortresses,” says counter-insurgency specialist David Kilcullen. He believes that cities themselves are under assault precisely because they are the places that different communities come together; and the result of the assault is that different ethnic and religious communities stop trusting one another, and become more susceptible to exploitation.

Terror in cities is nothing new, of course. LA was rocked by home-made bombs in 1910, and parts of Wall Street were decimated by a wagonful of explosives in 1920. The single deadliest act of domestic terrorism in US history occurred in Oklahoma in 1995, and with the exception of 9/11 violent attacks in the US are almost all homegrown. European cities are even more accustomed to it. Well before al-Qaida and Isis, the people of London, Madrid and Rome were battered respectively by the IRA, ETA and Anni di Piomi. There were more than 16,000 terrorist attacks in Europe over the past 45 years, according to the University of Maryland’s Global Terrorism Database, most of them during the 1970s and 1980s.

Moreover, it is easy for westerners to forget that the vast majority of terrorist actions occur elsewhere: a recent study of more than 1,300 cities ranked Baghdad, Mosul and Ramadi as the most terrorism-prone. It also showed that cities in Afghanistan, Egypt, Libya, Nigeria, Pakistan and Somalia are far more vulnerable to devastating violence than those in the UK, France or US. From 2000-2014 there were 3,659 terrorist-related deaths in all western countries combined. In Iraq, there were 13,076 in 2014 alone.

What can the worst-hit cities teach the rest about how to respond? Unfortunately, not much: there is no one-size-fits-all response to urban terrorism. Preventing attacks by lone wolves or sleeper cells in America requires a very different set of tactics than countering sophisticated networks of highly trained operatives in an active war zone such as Yemen, where “terrorists” are more like guerrillas, with highly elaborate operations and weaponry.

Nevertheless, cities aren’t passive. For example, many are installing extra layers of police surveillance in crowded spaces, and re-routing traffic away from critical infrastructure. Others are adding unobtrusive adaptations and reinforcements to city landscapes to reduce blast exposure, installing physical barriers around government offices and major businesses, and hiring counter-terrorism advisers. Positive police-community relations are also widely acknowledged as an essential feature of counter-terrorism strategy. The goal of all this is to minimise risk without choking city life altogether. As the saying has it, that’s when the terrorists win.

In the meantime, technology firms are lining up from Baghdad to Boston to equip city authorities with the software and skills to disrupt terrorism. Today there are more than 75 data fusion centres in major US cities, which share information between federal, state and municipal agencies. It is increasingly routine to use crime forecasting programmes – the Los Angeles Police Department has itself used predictive policing algorithms since 2013, and is reportedly mapping historical crime trends to predict future incidents – not without some controversy. New York, too, launched a controversial cyber intelligence unit that taps into conversations of potential jihadi recruits. And advanced electronic surveillance systems are commonplace, from city air terminals to city streets.

Civil liberty specialists are fearful that these measures confuse lines of authority, undermine privacy legislation and “militarise” law enforcement. “The real question is how to make a society more resilient in a way that does not destroy the very way of life in the city,” says Kilcullen. After the Paris killings, French security agencies clamoured for more power – leading to a backlash from citizens who were unwilling to let terrorism restrict their freedoms.

So how does a city judge how seriously to take a threat? Why did LA shut down while New York shrugged? The short answer is that judging a threat is very difficult. “Each threat needs to be surfaced and addressed in the context of the public safety officials’ existing programmes,” says Gary Margolis, CEO of Social Sentinel, a threat-awareness group focused on schools. “Alert services can augment the existing safety and security plans within schools, municipalities, and those responsible for protecting critical infrastructure.” By alert services, he means a new generation of social media monitoring systems – the tracking of millions of Facebook, Twitter and Instagram feeds to detect would-be perpetrators who telegraph their intentions.

But the fact is that there are limitations to what physical, policing and technological enhancements in cities can achieve. Not every bit of critical infrastructure can be made blast-proof. CCTV cameras may help with investigations, but likely won’t prevent new attacks – although French railway authorities are planning to roll out up to 40,000 new security cameras that can monitor excessive body temperature and signs of anxiety, in the somewhat Orwellian hopes of identifying thought crimes before anyone gets killed.

In truth, there are not many examples of cities getting it right. In Baghdad, they’ve essentially resorted to the urban tourniquet of gated communities. In Tel Aviv, the locals are simply getting used to a heightened threat environment.

Martin Powell, a former adviser to the mayor of New York, says the best strategy is straightforward: “Invest in good planning and coordination, actionable intelligence and strategies to harden targets.” It might be dull, but it delivers: the New York Police Department claims to have foiled at least 16 terrorist plots since 2001. London says it foiled seven terror plots in October alone.

But governments cannot be expected to stop every attack. There is a temptation to erect barricades and build higher walls after each high-profile terrorist event. “This could create a debilitating culture of fear,” says the urban theorist Richard Florida. In both LA and New York – not to mention most cities on the planet – urban terror is, real or not, a fact of life. The trick is not to lock cities down, not to introduce mass surveillance and strangle the city.

By Robert Muggah, The Guardian