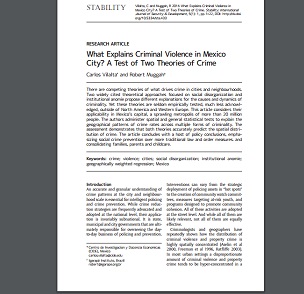 What Explains Criminal Violence in Mexico City? A Test of Two Theories of Crime

There are competing theories of what drives crime in cities and neighbourhoods. Two widely cited theoretical approaches focused on social disorganization and institutional anomie propose different explanations for the causes and dynamics of criminality. Yet these theories are seldom empirically tested, much less acknowledged, outside of North America and Western Europe. This article considers their applicability in Mexico’s capital, a sprawling metropolis of more than 20 million people. The authors administer spatial and general statistical tests to explain the geographical patterns of crime rates across multiple forms of criminality. The assessment demonstrates that both theories accurately predict the spatial distribution of crime. The article concludes with a host of policy conclusions, emphasizing social crime prevention over more traditional law and order measures. and consolidating families, parents and childcare.

By Carlos Vilalta and Robert Muggah
Go to publication