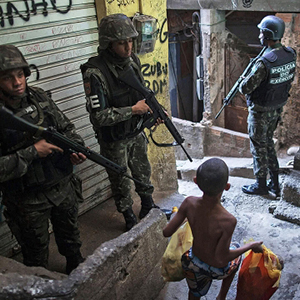 Originally published at The Economist, in October 5, 2017

IN THE warren of alleyways that make up Rocinha, Brazil’s largest favela, the air is heavy with foreboding. A feud between factions of the Amigos dos Amigos (Friends of Friends, or ADA), a drug gang that has controlled the slum since 2004, erupts in daily violence. Police in patrol cars creep through the lanes, their rifles poking out of the windows. Residents share news of shoot-outs on WhatsApp. “We are scared to walk around,” says Raquel, who sells colourful prints to a few brave tourists. At a command post a squad of policemen prepares for yet another operation. “It’s a never-ending war,” sighs José (not his real name), an officer drafted in from a nearby neighbourhood.

The city of Rio de Janeiro, which hosted the Olympic games in 2016, is having a grim year. Shoot-outs in favelas, or shantytowns, have killed dozens of people. A third of adults aged 18 to 24 are out of work. Many Olympic venues are abandoned; a fire in July damaged the velodrome. “Rio is in a real hole,” says Robert Muggah of the Igarapé Institute, a Rio-based think-tank.

Before the games began, Rio’s then-mayor, Eduardo Paes, boasted that the city would be the “safest place in the world”. Thanks to the deployment of 85,000 soldiers and police officers during the games, the claim did not seem ridiculous. Construction work temporarily protected cariocas, as Rio’s residents are called, from Brazil’s deep economic recession. Despite embarrassments like green diving-pool water the games were a success.

Not so the aftermath. The state government recorded 2,976 homicides in the first half of 2017, a rise of 14% on the previous year. Fifteen gun battles a day take place in Rio’s metropolitan region. More than 100 policemen have been killed so far this year in the state. Some experts fear that the murder rate could go back to levels of a decade ago (see chart). In July the federal government sent 8,500 troops back to Rio.

Rocinha, whose 100,000 people are crammed into one square km (250 acres), was thought to be relatively safe until recently. McDonald’s and Caixa Econômica, a bank, opened branches in the 1990s. The feud within the ADA, which began on September 17th, makes life a misery. The police make it a three-way battle. “It can be difficult to work out who is firing at whom,” says Eduardo Carvalho, a local journalist. The Dr Albert Sabin health centre shut down briefly for the first time in 35 years.

On September 22nd, after violence had spilled over into the prosperous areas of Gávea and Leblon, Brazil’s defence minister sent 950 troops into Rocinha. They restored calm, but withdrew seven days later. The mayhem has since risen. “Rogério 157”, the leader of an ADA faction, has defected to Comando Vermelho, a rival gang, splitting the favela into two territories. That could worsen the violence. “We will be here for a while,” says José, tapping the barrel of his carbine nervously.

Rocinha is suffering from a failure of policing, compounded by financial mismanagement and economic misfortune. The government of the state of Rio is nearly bankrupt. In September Brazil’s president, Michel Temer, approved the second federal bail-out in two years.

In 2008 the state started sending “pacifying police units” (UPPs) to 38 favelas. They were made up of 9,500 officers, many trained in non-violent policing and human rights. In Rocinha the UPPs reduced the circulation of heavy weaponry, says Misha Glenny, author of a book about the favela. The state gave bonuses to officers in areas where crime dropped most. Although the UPPs did not dismantle the gangs, violence fell. By 2015 the homicide rate had dropped to its lowest level in 25 years.

Optimism did not last. Despite their training, some policemen committed abuses. In 2013 Amarildo de Souza, a bricklayer from Rocinha who had gone out to buy seasoning for his dinner, went missing after questioning by UPP officers. This provoked violent protests; 25 officers were accused of torturing him and causing his disappearance. “The credibility that the UPPs had built up suddenly disappeared,” remembers Mr Carvalho.

The second phase of the community-policing programme—investment in health, education and social projects—was a failure. That is because the state and municipal governments paid too little attention and were weakened by economic crisis. From 2002 to 2016 Rio had the lowest growth rate among Brazil’s 27 states, points out Mauro Osório of UFRJ, a university. The state government depends heavily on income from the oil industry, which fell by two-thirds from 2013 to 2016. Corruption makes things worse. On September 20th this year Sérgio Cabral, the former governor of Rio state, was sentenced to 45 years in prison for embezzlement.

In return for financial aid, the federal government has demanded deep cuts to spending. The state slashed its security budget by 30% last year and stopped paying the salaries of many public workers, including police officers. Ballerinas at the municipal theatre became Uber drivers. Around 2,000 policemen lost their jobs in the past three years and 40% of patrol cars are out of service. The federal government gave extra money until the Olympics for UPPs. Now the units are in danger of disappearing, says Mr Muggah.

Favelados say that the UPPs, despite their failures, offer the best hope of reducing violence. A poll conducted in August in 37 favelas found that 44% of residents want UPPs to be improved, for example with better training, but not dissolved. A further 16% want them to continue as they are. The city and state governments need to increase non-security spending, too.

The region’s leaders do not inspire confidence. Marcelo Crivella, the city’s mayor since last year, is a Pentecostal bishop and enthusiastic crooner. His favourite ditty is “My Rio”, which asks God to “take over” the city. He consults the Bible more readily than security experts, say critics. Luiz Fernando Pezão, the state’s governor, has more practical plans, including a scheme to divert oil royalties from an environmental programme to one that combats violence. But he is suffering from cancer.

The problems of the region’s politicians encourage the federal government to play a bigger role. In addition to extra aid, it plans to send a multi-agency task force, modelled on initiatives in Colombia, Northern Ireland and South Africa, to prosecute police and politicians involved in organised crime. Everyone in Rio hopes for a recovery in the oil price, which would provide more money for public services. But oil prices are uncertain. Peace in neighbourhoods like Rocinha should not be.