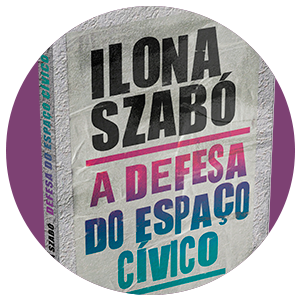 Igarape Institute created a new area of ​focus on preserving civic space and fomenting democratic action in 2020. The program features a host of podcasts, a book and an article. The Institute also engaged with traditional media outlets and through influencers and opinion leaders, such as Caetano Veloso (singer), Felipe Neto and Nil Moretto (digital influencers).

According to Freedom House, liberal democracy has been receding for almost 15 years. The rise of authoritarianism and populism is widespread, with dangerous implications for freedom of speech and civic action. The Institute launched a new initiative — Civic Space — to help fight back. The program engages civil society, private sector and citizens in protecting democracy. In partnership with Rádio Novelo, the Institute launched the podcast series You Can Change the World, reaching out to inspiring leaders about ideas that change public opinion. The podcast ranked 4th in most listened general ranking at Apple and 1st in the News/Politics category. Among the interviewees are personalities such as Armínio Fraga, Drauzio Varella, Nil Moretto and Thiago Amparo.

The Institute also released another book in 2020: A Defesa do Espaço Cívico (The Defense of Civic Space), by Editora Objetiva. The Institute also released The ‘Ágora’ is Under Attack: Assessing the Closure of Civic Space in Brazil and Around the World. These products were featured by Jovem Pan and CBN, where they were shared on Twitter for almost 600,000 people, O Globo, shared on the columnist Lauro Jardim’s Twitter reaching 200,000 more. UOL, and Época and shared on the columnist Guilherme Amado‘s Twitter feed being read by over 40,000.

The Institute also helped the Pact for Democracy to advance the #BrasilpelaDemocracia campaign, which generated the Virada da Democracia event. The Institute sent a repudiation note against the ex-Secretary’s of Culture, Roberto Alvim, for being an apologist of Nazism. The Institute joined manifestos against fake news attacking influencer Felipe Neto, as published in the Jornal Nacional, and on journalist Patrícia Campos Mello, who shared a note of gratitude to the Institute. The Institute likewise supported the Public Spirit Award.

As part of the Institute’s wider mission of mobilizing civil society to resist anti-democratic attacks, staff published columns in Folha, shared by Movimento Agora! and by Marina Silva, reaching 60,000 and 2.2 million people respectively. In Open Democracy, the Institute coined a new term — “pandemic populism” — to describe the chaotic response to COVID-19 by Brazil’s federal authorities. The Institute also spoke regularly with CBN, Valor, Project Syndicate, CBC and France24, in addition to promoting events such as the Harvard-Talk Dialogue with Fernando Haddad; CLP Talks, shared by 60,000 people on the website of the Movimento Agora! and the Conexões Festival, organized by the Bienal do Livro.