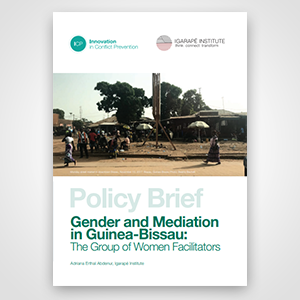 Gender and Mediation in Guinea-Bissau

On July 10, 2017, the President of Guinea Bissau, José Mário Vaz, met politician Domingos Simões Pereira, who had served as Prime Minister from 2014 to August 2015. Although Pereira remained head of the country’s major political party, the African Party for the Independence of Guinea and Cabo Verde (PAIGC), he had been dismissed (along with the entire cabinet) by the president in August 2015 during a power struggle between the two men. In a public statement, Vaz had justified the dismissal by referring to a “breach of trust. ”

For two years following this event, Vaz and Pereira had refused to speak to each other over differences regarding the implementation of the Conakry Accord, which sought to address some of the root causes of the country’s recurring political instability. Given the personal acrimony involved, as well as political differences, the meeting between Vaz and Pereira came as something of a surprise to observers. Yet behind the scenes, a small group of women facilitators had worked intensely for months to bring the two men in the same room. The meeting resulted from their persistent yet discreet efforts to help lessen tensions around the impasse by promoting dialogue among the key actors.

This policy brief addresses the origins and development of the Group of Women Facilitators (Grupo de Mulheres Facilitatoras – GMF), focusing on the period from May to November 2017. Although the brief does not offer a systematic evaluation of the initiative, the general impact of the GMF during these six months on the Conakry Agreement debates and, more broadly, on Guinea-Bissau’s political scene are assessed in light of the objectives the group set out for itself in May. The analysis draws on a combination of desk review of policy documents from the Guinea-Bissau government, major international organizations such as the UN and ECOWAS, and civil society entities in GuineaBissau, as well as semi-structured interviews with group members and other stakeholders carried out in Bissau in November 2017.

While the GMF does not represent a panacea to the country’s recurring instability, it offers a promising if incipient innovation in conflict prevention in Guinea-Bissau. By opening up a space for women to facilitate dialogue at the highest levels, the GMF has established new channels of communication that may not only benefit the Conakry process, but also promote greater political inclusiveness. If adequately supported by national and international actors, the GMF may contribute towards the prevention of future political instability and violence in Guinea-Bissau. In this sense, the GWF seems well aligned with calls within the UN and ECOWAS to address the root causes of instability in Guinea-Bissau and to promote the Women, Peace and Security Agenda that has emerged out of Security Council Resolution 1325 (2000).

The brief is structured in the following manner. First, some background is provided on the role of women in Guinea-Bissau society and politics. Next, the formation and evolving strategy of the GWF is analyzed against the backdrop of the Women, Peace and Security agenda as it has evolved within the UN, African Union (AU), and the Economic Community of West African States (ECOWAS).

The last part of the text offers a series of recommendations on how international actors can support
the initiative so as to help ensure its continuity and effectiveness and possibly to broaden its scope
and positive impact on Guinea-Bissau’s political scene.