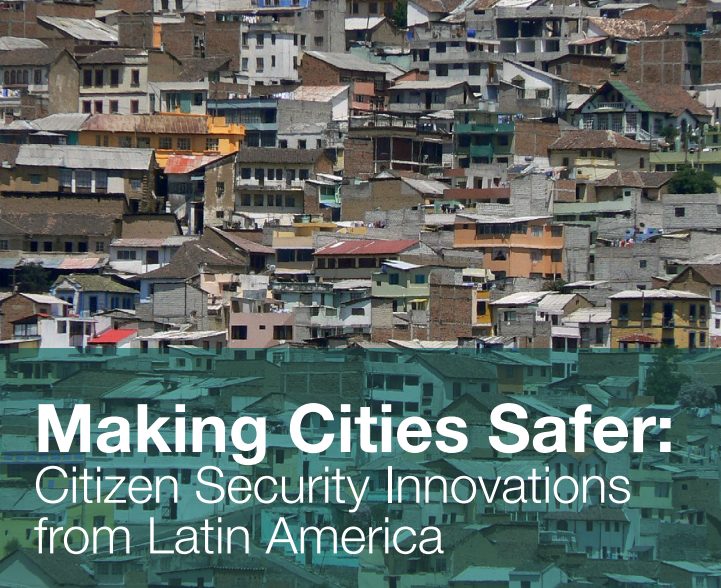 What really works when it comes to reducing violence? A new publication gathers ten examples of innovative policies applied in Latin American cities that have had positive, concrete results. What they hold in common is that they all adopt an approach that favors prevention and understands that public security is not synonymous with policing, imprisonment, and harsher penalties.

Making Cities Safer: Citizen Security Innovations from Latin America is co-edited by the Igarapé Institute, the Inter-American Development Bank (IDB), and the World Economic Forum (WEF) and will be launched during the Latin America forum, starting this Thursday (16).

“Latin American cities are a perfect laboratory for innovation in citizen security policies. Although it is one of the most unequal and violent regions on the planet, it has transformed difficulty into opportunity,” justifies Robert Muggah, research director of the Igarapé Institue and one of the authors of the study.

“Although national strategies are essential, it is within the cities that these policies are put into practice in a more focused way, guaranteeing results. Over the last two decades, the public policies in medium and large cities were fundamentally responsible for notable progress in homicide reduction.” Muggah concludes.

Cities such as Belo Horizonte (Brazil), Ciudad Juarez (Mexico), Kingston (Jamaica), and Medellin (Colombia), which is hosting the WEF this year, have managed to drastically reduce some of the principle insecurity indicators. According to the study, strategies clearly thought out over the long and short term focused on situations of risk, geographic as well as social, were determining factors in bettering the cities’ security. Each chapter analyzes the context and describes the measure carried out as well as the impact on security indicators.

“Reliable and valid data is a cornerstone of effective public policy. Unfortunately, such information is rarely available in Latin America. Just 6% of the 1,300 documented citizen security initiatives in the region have been subjected to a robust evaluation”, says Ilona Szabo, executive director of Igarape and co-author of Making Cities Safer. Also signing the text are Ruddy Wang, coordinator of the Igarape campaign, and IDB researchers Nathalie Alvarado and Lina Marmolejo.

“In 2015, 47 of the 50 most violent cities in the world were in Central America, the Caribbean and South America – 32 in Brazil – but we have good models in the cities, such as Belo Horizonte, Bogota, Kingston, and Medellin, that are managing to turn around this negative situation. The challenge is the continuity of these practices and the connections with policies for socioeconomic development. But whereas some cities are improving, others are becoming more dangerous. It is important to disseminate these positive examples so that they might be adapted to other realities,” Szabo affirms.

The Igarape directors will also participate in the event in Medellin. Ilona Szabo will participate on a panel about the future of drug policy on the 16th; on the next day (17), Robert Muggah will speak about innovative solutions and the use of technology in combatting violence. The event will be broadcast live on the Forum page: