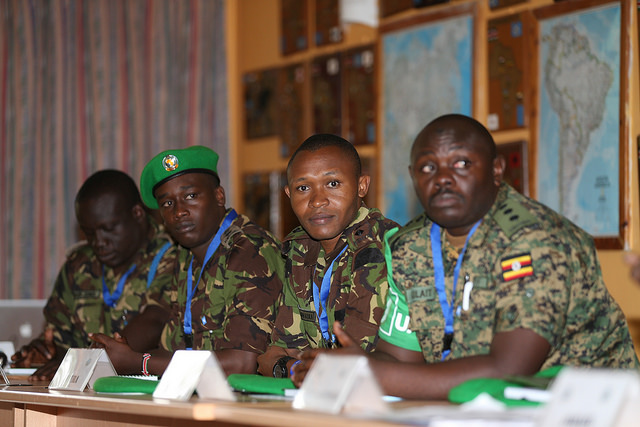 With the budget cuts to peace operations implemented last year and the prospect of even more reduction in resources, debates about UN peacekeeping effectiveness have intensified. One of the areas sorely in need of innovation is peacekeeping training and, more generally, the preparation of troops, police officers, and civilians for peace operations.  Secretary General António Guterres  acknowledged this point in January 2018 at the African Union (AU) Headquarters in Addis Ababa, when he emphasized the need to ensure better preparation for peacekeeping forces.  The point is also reinforced by the recent report “Improving Security of United Nations Peacekeepers,” which identified deficient pre-deployment training as one of the main causes of fatalities and serious injuries among peacekeepers in the field.

Improving peacekeeping training centers in the most important troop and police contributing countries (TCCs and PCCs) for UN and AU missions—most of them developing countries facing considerable resource limitations—has thus acquired greater urgency.  The case of Kenya illustrates how a major TCC/PCC has worked to boost its pre-deployment training facilities, practices, and general effectiveness. In 2017, Kenya contributed 3,664 troops to the AU Mission in Somalia (AMISOM), in addition to sending 191 troops and police for UN Missions (mostly for UNAMID–AU/UN Hybrid Operation in Darfur).  The development of a Kenyan peacekeeping training center capable of preparing a large number of personnel is a major example of how international cooperation in this area can generate new solutions and improve the quality and effectiveness of peacekeeping. This example also shows the importance of researching and adapting training to the specific challenges of each mission context, particularly in light of emerging or expanding threats in complex emergencies, such as organized crime, violent extremism, and new forms of explosive devices.

The IPSTC, located in Karen, was established in 2001 as part of the Kenyan Defense Staff College. The center—back then, known as PTSC—initially focused on preparing Kenya´s national forces for deployment to United Nations peacekeeping missions.   Since its founding, however, IPTSC has become an independent regional hub, embracing not just training but also research and education.  In addition, as the AU´s engagement with peacekeeping expanded, IPTSC became one of the most important training centers for AU missions.  These days, in addition to preparing Kenyans for both UN and AU peace operations, IPSTC also trains personnel for two standby forces: the African Standby Force (ASF) and the Eastern Africa Standby Force (EASF). It is now one of the oldest, largest, and most established centers in the whole continent.

One of the ways Kenya has strengthened its peacekeeping center is through the establishment of partnerships with other countries and international organizations.  Since 2011, IPSCT has signed 15 partnerships, including with Canada and UN Women.  Moreover, it has accumulated more than 30 clients, from the Rwanda National Police to Save the Children, who sign up for courses among 42 offerings.  The current list of courses includes “Dialogue, Negotiation and Mediation;” “Community Policing;” and “Child Protection,” all following UN and AU standards. Most of the courses are available for the three components in a peacekeeping mission: civilian, military, and police.  According to the most recent data available, 37% of participants were civilian, 37% military, and 26% police. (They also offer a course only for civilians, and another only for the female military.)  Since in many peacekeeping training centers there is either a heavy focus on the military component or the three types of personnel seldom have a chance to interact, this approach fosters better integration and mutual confidence and familiarity among soldiers, police officers, and civilians who will be deployed in missions.

IPSTC has also invested in researching and adapting to mission-specific challenges, including violent extremism and the prevalence of explosives.  For instance, the center has a Mine Action and Disarmament Program (in fact, IPTSC emerged in 2009 out of a merger with the International Mine Action Training Center, IMAT).  It is also developing a C-IED (Counter Improvised Explosive Devices) Wing, as response to the fact that the mines and explosives are among the most significant threats to UN peacekeepers in the Horn of Africa and other settings.

Second, partnerships can provide financial resources that are vital to improved and innovative peacekeeping preparation.  For instance, in 2017, Kenya obtained UK support to fund infrastructure for a new C-IED building, prompted by the shared recognition that knowledge and capabilities relating to C-IED have become vital to operating in complex contexts. Many partnerships entail a combination of substantive cooperation, for instance through personnel exchanges and course design, as well as resources for facilities and activities.

Finally, IPSTC has pursued innovation in its content by adopting cross-cutting policies. In 2015, for instance, a Gender Policy was implemented as a way to not only advance the Women, Peace and Security Agenda, but also to make Kenyan peacekeeping more effective.  In order to ensure that participants understand the context of the conflicted-area to which they will be deployed, the instructors highlight the importance of a gender perspective in missions. They adapt lessons learned and focus heavily on research (including fieldwork conducted in Somalia and South Sudan) and localize content for the training modules. Through this policy framework, gender has been mainstreamed in all areas, from strategic planning to human sources, in addition to being integrated into training and research processes.  At last count, 32% out of 296 total staff at IPTSC and 25% of those enrolled in courses were female—while still far from optimal, these percentages are much higher than at most other peacekeeping training centers.

In order to diversify its partnerships, IPTSC has also looked to other TCCs and PCCs for knowledge exchange and innovative solutions. As a member of the International Association of Peacekeeping Training Centers (IAPTC), a network of around 70 organizations from over 50 countries, IPTSC participates in conferences and other initiatives meant to boost experience sharing among peacekeeping training experts, practitioners, and researchers. Under this broad umbrella of cooperation, South-South cooperation in peacekeeping training is still incipient, and one that IPSTC could tap into in order to generate and adapt lessons learned from an even wider variety of TCCs/PCCs.

While strengthening pre-deployment training for peacekeepers is only part of the solution for making missions more effective—areas like mandate design, preventive work on sexual exploitation and abuse, and protection of civilian practices also need improvement—the case of Kenya shows that it is an essential part of such improvement.  Other states engaged in peacekeeping, including those focusing on providing resources and mandate design, should support these exchanges, networks, and institutional innovations.