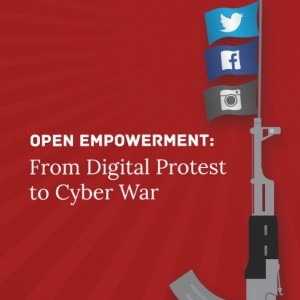 The Internet is profoundly reshaping the way governments and citizens interact. On the one hand, civilians are using cyberspace to express grievances and pursue progressive forms of political change. At the same time, cyberspace is being leveraged by governments, businesses and criminal gangs to extort, intimidate and even kill. States are struggling to balance the imperatives of public safety and individual privacy online and off. There is a danger that digital freedoms will be strangled in the process.

These tensions are highlighted in a new e-book – Open Empowerment: From Digital Protest to Cyber ​​War – edited by Brazil-based Igarapé Institute and the SecDev Foundation in Canada. The edited volume is currently listed on Amazon and reveals how new actors like Anonymous, YoSoy132, and Blog de Narco have transformed the ways in which citizens interact with their governments and each other. The volume includes contributions from specialists in cyber security, politics and law from Argentina, Brazil, Colombia, El Salvador and Mexico.

“Internet users are finding their voices online and being digitally empowered. The massive penetration of the Internet and mobile phones in Latin America has tremendous consequences for governance, economics and security”, says Robert Muggah, Research Director of the Igarapé Institute and co-editor of the book with Rafal Rohozinski, CEO of the SecDev Group.

According to Muggah, “the Internet is creating new forms of open empowerment. This entails accelerated political, social and economic agency and networking enabled by the digital revolution. It involves citizen who are legitimately expressing their interests online. It also includes cyber cartels and digital gangs who are colonizing cyberspace for their own ends”.

Introduction: An era of “open empowerment” in Latin America

Mapping the digital ecosystem of gangs in the U.S. and Mexico

Perspective: studying open empowerment in the age of big data

Other publications on cyber security by the Igarapé Institute