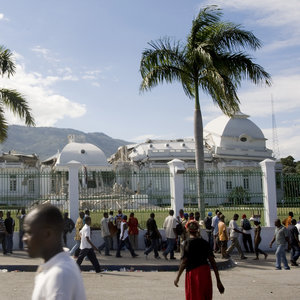 Many in Haiti suspect fraud in recent election, poll finds

MIAMI – A poll by an independent research group has found deep public suspicion of the first round of the presidential election in Haiti, a finding that is likely to fuel calls by opposition parties for a recount of the disputed results.

It is not unusual for exit polls to vary from actual vote counts. This “very large discrepancy,” does not prove the preliminary results announced by the Provisional Electoral Council are inaccurate, but suggests further scrutiny is necessary, said Robert Muggah, research director of the institute.

The electoral council has not released final results and has so far rejected calls by opposition leaders for a recount. The runoff is scheduled for Dec. 27 and is expected to feature Moise, a businessman who has never held political office but was picked as a successor by President Michel Martelly, is expected to face Celestin, a former head of the state-owned construction company who was defeated in the disputed presidential election in 2010.

The Igarape exit poll found about 4 percent of voters witnessed what they considered fraud, which included officials improperly turning away voters, people voting multiple times or voting for other people. The U.S., Canadian and Haitian researchers interviewed 1,991 people at 135 polling stations. The survey had a margin of error of 2.29 percentage points.