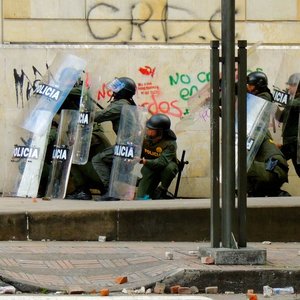 Latin America’s Poverty Is Down, But Violence Is Up. Why?

With poverty in Latin America and the Caribbean at its lowest level in decades, why is violence off the charts? Although some countries are worse off than others, the region features the world’s highest homicide rates. This relationship is puzzling and counterintuitive. Researchers tend to expect an inverse relationship between improvements in the welfare of the poor and reductions in violent crime.

First, the good news: Most Latin American and Caribbean countries have experienced dramatic reductions in poverty since 2000. According to United Nations data, the proportion of the region’s 580 million residents suffering from poverty declined from 41.7 percent to 25.3 percent. In absolute terms, this translates to at least 56 million people lifted above the poverty line from 2001 to 2012. During this period, it was not just incomes that rose – health and education did too.

Now for the bad news: Parts of Central and South America are the most murderous on the planet. Though protracted wars in Colombia and Peru are winding down, the scale of lethal violence region-wide is breathtaking. Latin America and the Caribbean are home to 8 of the top 10 most violent countries and 40 of the world’s 50 most dangerous cities. Just four countries – Brazil, Colombia, Mexico and Venezuela – account for 1 in 4 violent killings around the world each year.

It was not always this way. In spite of civil wars and brutal dictatorships in some Latin American and Caribbean states, homicide rates were closer to the global average during the 1960s and 1970s. Since then, murder rates have declined in most other parts of the world. Yet with few exceptions, killing, assault and victimization across Central and South America and the Caribbean worsened.

The precise relationship between poverty and homicide is still a mystery.

Part of the problem is disagreement over how “poverty” is defined. For one, it is more than just a narrow material measure. While millions of Latin American and Caribbean citizens at the bottom end of the social ladder have experienced real income gains, the quality of economic growth has been poor. For many countries, poverty reduction was based on a model advocating consumption. Declines in poverty were often due to direct cash transfers and access to low-wage part-time work. This resulted in limited social mobility.

There is a wide range of factors behind the rise in violence, experts say. Among them:

Persistent inequality. We’ve long known that the more unequal a setting, the higher the rates of violence. Latin America exhibits the most unequal distribution of income in the world, including 10 of the top 15 most unequal countries on the planet. Although inequality has declined across much of Latin America and the Caribbean in recent years, that progress is now stagnating. The World Bank and SEDLAC recently detected reversals in inequality in some parts of Central America´s northern triangle and the Andean region.

Youth unemployment. About 13 percent of Latin America and the Caribbean’s 108 million youth (ages 15-24) are unemployed. This is three times the rate for adults. Over half of those who actually do work are tied to the informal economy. Taken together, more than 20 million young people are not being educated, trained or employed. More unemployed males means more violence. In Brazil, a 1 percent rise in the number of unemployed men results in a 2.1 percent spike in the murder rate.

So-called “aspirational crime.” Those either perpetrating or suffering from homicide are typically young people who are out of work, out of school and out of options. As observed by economist Gary Becker in 1968, would-be criminals determine that the benefits of their crime outweigh the potential costs. Social scientists have demonstrated how limited job horizons are associated with a reduction of the opportunity costs for crime. Unemployment is also connected to a surge in gang membership.

Continued weak security and justice institutions. Abusive, corrupt and illegitimate institutions may fuel crime. Meanwhile, low institutional capacity ensures that law and order is associated with patronage and impunity. In Latin America, just 20 of every 100 murders result in conviction; the global rate is 43 in 100. Institutional weaknesses can be traced to a legacy of conflict and military rule in countries like Argentina, Colombia, El Salvador and Haiti. Many military and police institutions continue to operate with a war mentality. Some of them harbor clandestine structures in the armed forces, intelligence and judicial sectors. In Guatemala, for example, right-wing paramilitary groups are still active and are cultivated by powerful elites.

Organized crime – especially drug trafficking. All Latin American and Caribbean countries are affected to varying degrees by criminal organizations, especially drug cartels that manage an estimated $330 billion in revenue a year. In many countries, such groups have already penetrated all branches of government. After all, a weak state is a boon for organized crime. Buying off public institutions is much more efficient than fighting them.

There are also other reasons behind the spike in violence, from unregulated urbanization – which partly explains a surge in homicide rates in large and intermediate-sized cities and slums – to the abundance of unlicensed firearms, including those trafficked from the U.S. or leaked domestically. Some also blame social norms sanctioning machismo, and unequal gender relations are credited with leading to high intimate partner and domestic violence rates.

It’s a long list of challenges. So what are policymakers to do?

At a minimum, leaders need to shore up the achievements made in reducing poverty, inequality and chronic unemployment. More concretely, they could double down on policies designed to reduce inequality, not least initiatives that aim to keep young people in school and in the labor market. In Mexico, conditional cash transfer and redistribution programs are correlated with reductions in both homicides and sexual violence at the state and city levels. And in Brazil, conditional cash transfer and housing improvement measures such as Bolsa Familia and Minha Casa Minha Vida have yielded positive impacts on reducing property and youth crime.

Meanwhile, public and private investments in safety and security are showing promising results. Transparent civilian oversight of the region’s military, law enforcement and justice institutions is a precondition for restoring their credibility and legitimacy. Likewise, improving data collection on crime is also leading to smarter policing and the more efficient delivery of justice. These are all deeply challenging tasks, and demand courageous leadership if they are to be achieved. The real question is whether Latin American and Caribbean citizens are ready to finally turn things around.