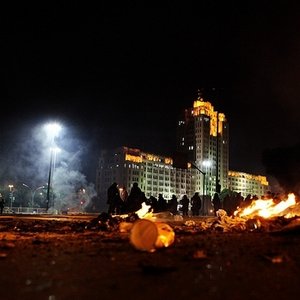 It´s time for humanitarian agencies to work in fragile cities

The breakneck pace and scale of urbanization is precipitating an unprecedented demographic transition. Not surprising, violence is also migrating to the metropole. Overlapping forms of violence are emerging in fast growing lower-income neighborhoods and informal settlements of the South. Some war-torn cities  Aleppo,Gaza, and Mosul  are especially badly affected, with entire neighborhoods in smoldering ruins. In other municipalities  Caracas, Cape Town, Maceio and San Pedro Sula  violence is reaching epidemic levels even if the buildings are still standing.

The shift of violence to cities and their peripheries is inevitable. Today, more than half of the world´s population lives in large- and medium-sized cities. In most developed countries and across Latin America the proportion rises to three quarters. Just over 50 per cent of Africans live in one as do a third of Asians. But these ratios will change: more than 90 per cent of future population growth will occur in the sprawling slums and cities of the South especially in countries such as China, India and Nigeria.

Not all metropolises are equally violent. Western cities have seen murder rates decline by at least 40 per cent since the 1990s. By way of contrast, a rash of cities in Latin America, the Caribbean, Southern Africa, Central Asia and the Middle East have seen rates of homicide stay constant or even rise over the same period. Some of these fragile cities are at war in all but name.They are gripped by a bewildering web of armed actors that civilians find themselves caught up in. This acceleration in violence and victimization is taking place in spite of improvements in literacy, health and poverty reduction.

The causes and consequences of city fragility are getting attention with some humanitarian agencies starting to work in, and on, urban violence. For example, relief agencies across the US have mobilized assistance for the tens of thousands of Central American children crossing the border from Mexico. For more than half a decade, the International Committee of the Red Cross (ICRC) has tested new programs to address so-called other situations of violence in cities such as Medellin, Rio de Janeiro andTegucigalpa. Médecins Sans Frontières has also initiated violence preventionactivities in inner city neighborhoods across the Americas. Even so, not all aid agencies are convinced.

International donors are also gradually taking notice. The European Union Humanitarian Aid and Civil Protection department has taken the unprecedented step of expanding its work on urban violence and disasters, including in Mexico and across Central America. The UK´s Department for International Development (DFID) and the German development cooperation agency, GiZ, are also doubling down on researchto better diagnose the problem and investing in urban safety. They are actively exploring ways to mitigate risk factors giving rise to political, criminal and social violence in informal urban settings.

The decision whether or not to work in fragile cities is often informed by some basic questions. Do we see any value added? Will we make a real difference on the ground? Is it safe for our staff? What are the legal implications? Aid agencies also tend to be guided by a set of basic principles. These include being clear on the aims of the intervention, being ready to adapt, adopting highly localized interventions, developing strong community partnerships, planning for the long-term (while also having an exit strategy) and doing no intentional harm.

A few additional lessons are worth singling out from the handful of organizations working in violent urban settings:

In fragile cities it is imperative to work with government institutions rather than around them. Aid agencies are used to rapidly delivering aid, setting up logistics systems, and working around (reluctant or interfering) state agencies. And while there is more sensitivity today to the importance of building local capacity, working with national partners, and avoiding the distortion of domestic markets, habits take time to change. Humanitarian action in fragile cities means working directly with multiple civic authorities. The emphasis is often more on coordination than implementation and aid agencies should prove willing to take a back-seat and take their flags down a few notches.

Humanitarian agencies should consider testing primary and secondary violence prevention measures in fragile cities. Basic needs and essential services are of course central to the humanitarian enterprise. But some aid agencies are expanding their toolkits to reduce violence risks and promote protective factors that limit exposure. This may mean investing in early childhood programs, school-based activities, initiatives for single female headed households, projects targeting teenage boys, urban improvement schemes and more. As the International Federation of the Red Cross (IFRC) has shown, these interventions are worthwhile in their own right. They can also facilitate humanitarian access.

Another key requirement in fragile cities is improved data collection and real-time mapping. Even if not always applied, there is widespread acknowledgement in the aid world of data-driven interventions and the importance of quality impact evaluations. In fragile cities, access to a wide range of information on beneficiary populations, service delivery systems, organizations and actors is critical. Even in ostensibly data-scarce environments there are new opportunities to harvest and analyze data. For example, digital humanitarians are working in conflict- and disaster-affected cities. Humanitarian agencies are strongly advised to build this capacity in-house.

Finally, aid organizations would do well to start small, build to scale, and hand-over. Notwithstanding the temptation to undertake large-scale programs in fragile cities, relief organizations should proceed with caution. There are exciting ways to scale up city-based interventions, but only if these are aligned with formal and informal delivery providers and with stable resourcing and political investment. To be effective, aid agencies need to keep an open mind, and invest heavily in partnerships from the get-go. This is not always easy and may, in some cases, be undesirable.

By Robert Muggah
Go to publication