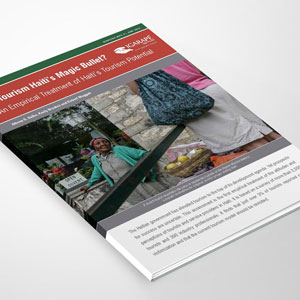 Tourism is often described as key to Haiti’s salvation. The economic potential of foreigners visiting the island nation is cited in virtually all major assessments of the country’s current development problems. This may seem at first counterintuitive: the impoverished and disaster-stricken country has long-struggled with violence and political instability. But it is increasingly regarded as necessary. Immediately after the January 2010 earthquake it was recognized that strategic investments would be needed to secure Haiti’s economy once foreign aid had diminished.

Tourism was recently elevated to a top priority by Haiti’s current administration and the Ministry of Tourism. The government hopes that an influx of foreign currency generated by tourist dollars could help lift the country out of aid-dependency. This is not as surprising as it may seem. Haiti used to be a Caribbean destination – Graham Green described it as a tropical idyll in the mid-twentieth century during the early years of the Duvalier regime. What is more, former U.S. president Bill Clinton publically reminisces of his honeymoon in Haiti and until the 1990s Club Med ran a resort just an hour outside of Port-au-Prince.

Yet the prospects for tourism are still highly uncertain. After coups in 1991 and 2004, recreational tourism has all but vanished. Since the devastating 2010 earthquake, one is more likely to see missionaries and aid workers in Haiti than vacationers. This Strategic Note assesses the extent to which Haiti is safe for tourism and explores how tourists and those in the industry view their role in Haiti’s development efforts to increase tourism. It draws, as in past Igarapé Institute publications, on both quantitative surveys and qualitative research. Informed by this empirical evidence, the study sets out a number of recommendations to improve the tourism industry within the country.

• The primary reasons tourists visited Haiti in early 2013 was to see family and friends or to volunteer in aid development projects. Few tourists decided to visit Haiti explicitly for leisure or recreational purposes;

• In spite of dire warnings, violent crime was rarely experienced by tourists, though property crime was more common. Only some 3.1% of tourists in the study reported any kind of criminal victimization;

• Not surprisingly, given the relatively low incidence of criminal victimization, the perception of Haiti as a safe place to visit positively changed from arrival to departure and overall tourists felt safer than expected during their stay;

• Informal interpersonal interactions with ordinary Haitians were highlighted by many visitors as the most meaningful part of their trip to Haiti; and

• Efforts to create Haiti as a high-end tourist destination may be misdirected as most current visitors – whose tourism needs are being incompletely met at the current time – are working class or middle class in their country of origin.