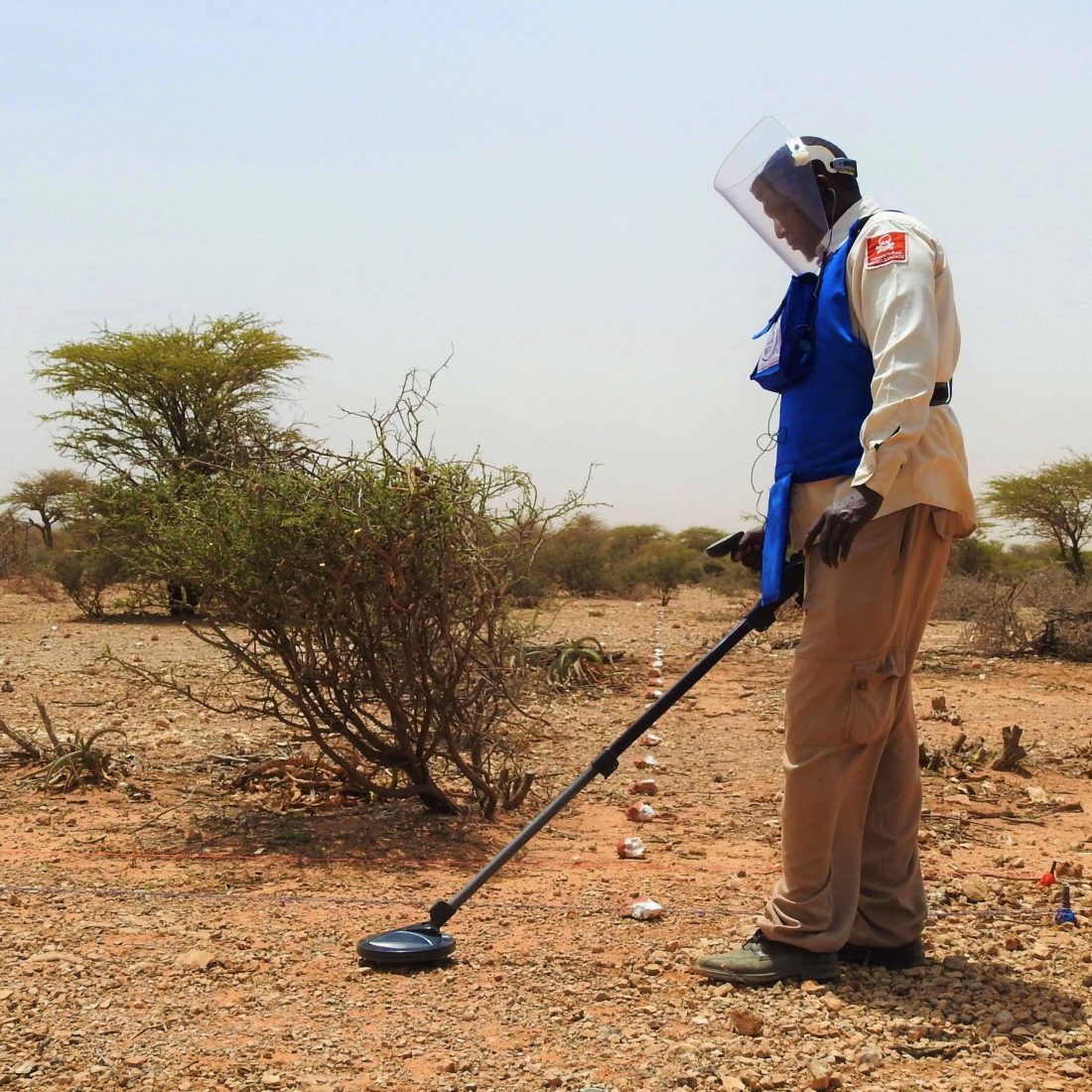 Incorporation of Ex-Combatants in Humanitarian Demining 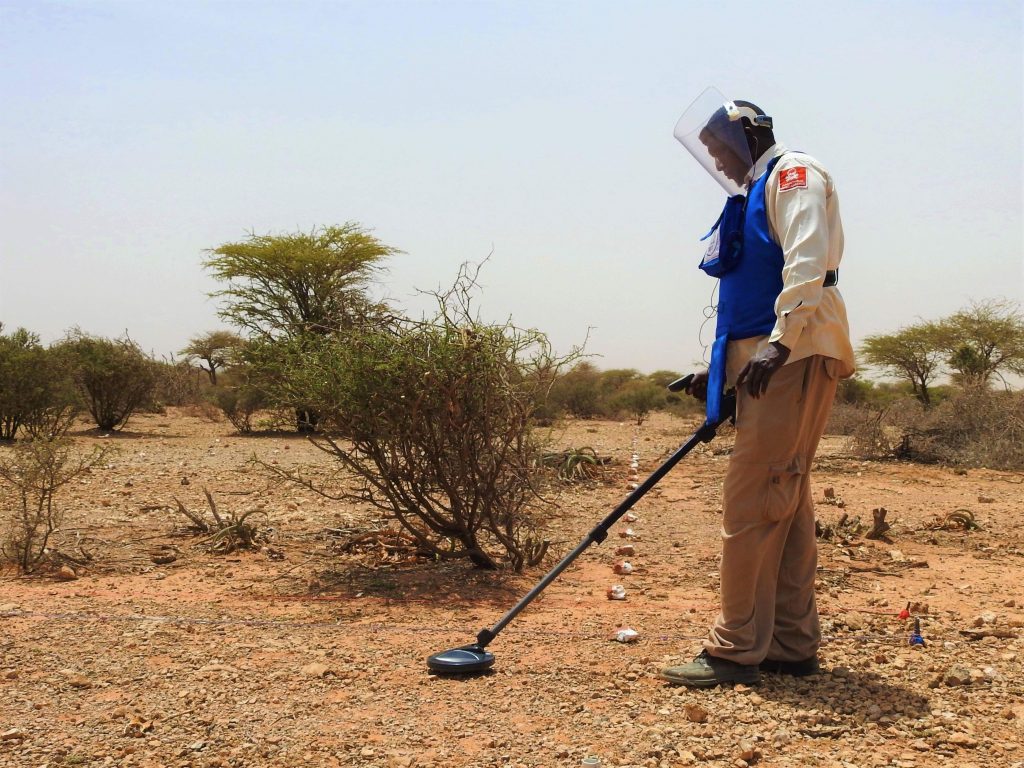 As part of the peace effort between the Colombian government and the FARC, a pilot program was launched in 2015 allowing ex-combatants from the guerrilla to collaborate with Army soldiers in humanitarian demining—an urgent task given the country’s estimated 52 million square meters of contaminated land.  Former combatants from other illegal armed groups in the country had already been participating in humanitarian demining, for instance as part of the staff of the agency HALO Trust, but the pilot program provided new momentum to the effort to incorporate former FARC fighters, including in direct collaboration with Army counterparts. In 2017, after the final peace deal was signed, new ways of incorporating FARC ex-combatants arose, as did interest among this population; by April, some 1,500 ex combatants had signed up to work in demining.

In 2017, another mode of participation in demining emerged. The FARC—which has been reinventing itself as a political party after laying down arms earlier in the year—founded an organization, with support from the Directorate for Comprehensive Action against Mines (Descontamina Colombia), to work in demining alongside the nine other agencies already operating in the country, as well as the Colombian army.   The staff of the civilian organization, called Humanicemos DH, have been training for accreditation from the Organization of American States (OEA). After nine months of preparation, Humanicemos  began operating with small teams in parts of the country.  Despite some funding from the European Union for the incorporation of ex-combatants, however, in some departments Humanicemos is still seeking funding to start operating.

At a global scale, ex-rebel/militia fighters are key to demining initiatives and Colombia is far from the only context in which this has taken place. While such efforts were knowingly led and implemented by governmental or international bodies in countries such as Colombia, Niger, and Afghanistan, the case of Somaliland offers an interesting alternative to the usual ‘top-down’ approaches to reintegrating ex-combatants in post-war settings. Indeed, when demining efforts are implemented, it is often the case that ex-combatants are coincidentally recruited as they become available and are looking for new sources of livelihoods. It has been the case in Somaliland and southern Somalia, even though no specific strategy was designed to facilitate such outcomes.

There are several reasons to incorporate ex-combatants.  First, they often have detailed knowledge of where mines and explosive remnants of war (ERW) lie.  In Colombia, for instance, in addition to landmines, they often can locate where there are unexploded bombs from Army operations.  Second, they have detailed knowledge of different types of explosive items, including landmines with non-metal casings, which present particular challenges for detection.  Second, ex-combatants are familiar with the local terrain and able to work in difficult settings, having lived in those areas for years or decades.  In parts of Caquetá, for instance, some communities have expressed preference for having the FARC ex-combatants clear mines and ERW in their fields. In Somaliland, deminers who might have served as children ammunition carriers are able, years after the conflict and despite the barren and drought affected land, to identify areas that were the most affected by warfare. Their experience, as civilians or as combatants is useful to mine action organizations trying to map and assess hazardous areas.

Likewise, ex-rebel and army fighters also have reasons to participate in mine action and overcome their conflicting pasts. First, demining offers stable and comparatively well-paid employment over many years–a rare find in post-conflict contexts where aid funding and corresponding employment opportunities are volatile. Second, youth who had to give up their education at an early age to join armed groups can find meaningful employment that does not require full literacy.  Their military skills–such as team and physical work–enables them to gain responsibilities and income as they take on section or task supervisor roles. Third, for practical and humanitarian reasons, demining is often community-based, which means that the same groups that used to fight over a territory are now employed to clear the mine belts that they laid against each other, regardless of which side they fought for. As a result, the physical aspect of the work and the fact that deminers operate in remote areas for weeks at a time also mean that they are likely develop a strong bond and mutual respect overtime, overcoming their initial reluctance to work together.

This incorporation can be considered as part of broader efforts to reintegrate ex-combatants into broader society, whether through traditional DDR programs or via alternative paths, such as that being developed in Colombia.  By providing them with a salary and allowing them an opportunity to contribute in concrete and positive ways towards peacebuilding, this integration can help set ex-combatants on paths other than armed fighting. At a collective level, the practice also promotes reconciliation among former enemies as they find themselves pressed to collaborate on a common goal in risky settings. For example, after years of successful operation in Somaliland, HALO Trust staff, are welcoming newly recruited southern Somalis into their camps for demining training. Likewise, as operations in southern Somalia expands, Somaliland staff are also traveling South to facilitate demining work, a unique collaboration in what remains a challenging context decades after the end Civil War.

Finally, in some settings, including in Colombia and Somaliland/Southern Somalia, the participation of ex-combatants can open up new avenues of communication with hard-to-reach communities, especially those that had close ties to the guerrillas, whether due to family ties or to geographic proximity.   These communities often have access to far less aid and government programs than others. Bringing deminers to those places can sometimes require extra curriculum activities such as water provision or helping communities to build wells —as it was contemplated in Somalia during the recent drought.

Although in some places ex-combatants have been incorporated into demining programs spontaneously rather than through a specific program, these cases show that planning for such incorporation can benefit multiple populations, from remote communities to the ex-combatants. By integrating ex-combatants into demining agreements, decontamination strategies and other peacebuilding policies, a more inclusive approach to humanitarian demining can help prevent the recurrence of violence in conflict-affected settings.

Laurie Druelle works with humanitarian assistance and mine action in Somalia/Somaliland. She holds an MA in Conflict, Security & Development from the Department of War Studies at King’s College.