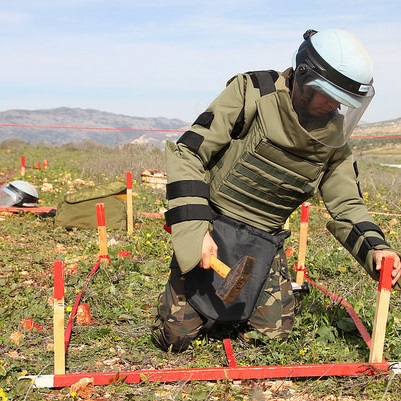 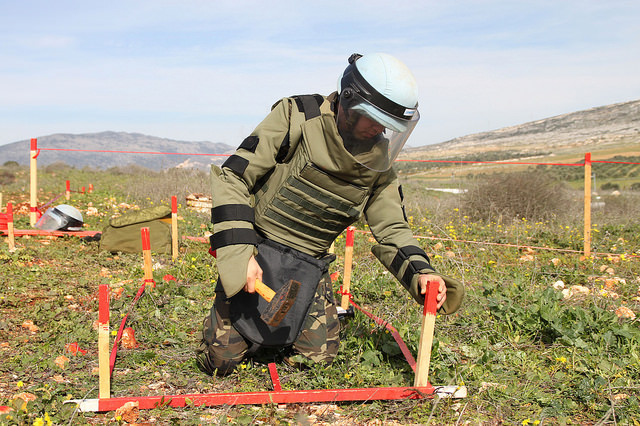 Humanitarian demining is often presented as a technical component of post-conflict reconstruction and peacebuilding, a painstaking and slow process necessary to avoid the human suffering caused by anti-personnel mines, improvised explosive devices, and explosive remnants of war (ERW) such as unexploded ordinance that have been left over after a peace deal is signed. According to the Nobel-winning International Campaign to Ban Landmines (ICBL) 2016 report, global mine casualties reached a 10-year high even as funds for clearance has reached a 10-year low.  In 2015 alone, there were 6,461 mine/ERW casualties worldwide, the vast majority of them civilians—30% of whom are children.  Despite the 1999 Mine Ban Treaty, which bans the use of mines that detonate due to human contact, non-state armed groups such as those in Colombia continue to make wide use of anti-personnel mines, especially improvised victim-activated mines.

In addition to direct casualties, mines represent a significant hurdle towards implementing peace agreements.  The casualties during and after conflict can reinforce lasting resentments that make it harder to achieve reconciliation.  After an accidental mine explosion, the event can reignite deep animosities among communities or groups, sometimes provoking backsliding in the peace process implementation. In addition, mines hinder peacebuilding and development across vast spaces, especially in rural areas. Even the mere suspicion that there may be mines in a field, for instance, makes stakeholders hesitant to farm that land or to build much-needed infrastructure. Mines set across roads, riverbeds, and other routes may cut off people’s access to key resources, from water and jobs to town markets. In areas where more than one illegal armed group is involved, caches of unused explosives may also fall into the hands of other illegal groups. More generally, mines contribute towards a “climate of fear” that poses social-psychological and political challenges to the implementation of peace agreements.

In many conflict-affected areas, clearing landmines is therefore a necessary step before other humanitarian initiatives can be implemented. But mine surveying and clearance (for instance, through disarming or controlled detonation)—and, more broadly, mine action, which also encompasses support to victims, advocacy, stockpile destruction, and awareness-building measures—can also be understood as a promising conflict prevention response. In addition to avoiding the physical and psychological trauma caused by accidental explosions, humanitarian demining offers opportunities for broader peacebuilding.  Since demining is typically in the interests of warring parties and the general population, it provides a point of dialogue and action for rallying converging interests and for implementing broader social services, such as assistance to victims and opportunities for local reconciliation.  In addition, demining often brings together military personnel and civilians (not only individuals, but also civilian demining agencies) in close collaboration—an integration that is often needed as part of security sector reform (SSR) efforts.  Innovative partnerships can emerge around demining efforts, involving not only major international players such as the United Nations (UN) and regional organizations such as the Organization of American States (OAS) and the African Union (AU), but also humanitarian agencies, donor countries, and South-South cooperation partners like Brazil.

There are also social integration opportunities at a more micro level. Under certain circumstances, some ex-combatants from illegal armed groups undergoing Demobilization, Disarmament and Reintegration (DDR) can be incorporated in anti-mining efforts, making use of their experiences with weapons in a positive way that can also help lessen the stigma around ex-combatants.

But the challenge of eliminating these weapons remains in many parts of the world.  In Colombia, it is estimated that up to half the country’s territory is affected by mines. Colombia’s remains the second most mined country in the world—a legacy of nearly sixty years of conflict among government forces, guerrilla groups, paramilitary forces, and drug trafficking organizations that have often planted mines and IEDs indiscriminately. According to the Directorate for Comprehensive Action against Antipersonnel Mines–Descontamina Colombia, since 1991, almost 12,000 people around the country have been victims of landmines and related devices.  In 2017, the Army alone destroyed more than 6,000 IEDs, with a total of 122,000 devices destroyed since 2010.

In Caquetá, one of the departments most severely affected by the conflict between the government and the Revolutionary Armed Forces of Colombia (FARC) guerrilla group, intensive demining efforts began in February. The peace agreement’s effort to improve life in the long-neglected rural areas through a series of development programs for education, health, electricity and housing, among others, runs into considerable hurdles from the lasting presence of mines in large areas.  When the peace deal was signed, 20 veredas (municipalities) in Caquetá were identified as priority areas for demining.  In and around the town of San Vicente de Caguán, once considered a bastion of the FARC, there have been over 250 victims.  Demining agencies identified over 700 mined fields around the town.  Major cache findings continue to be made in Caquetá and other departments of the Amazonia region.  In October 2017, a joint operation between the Colombian Army, Navy, and National Police uncovered a cache of 444 buried mines in neighboring Putumayo.

Colombia has set the goal of completing demining efforts by 2021. While the challenge is considerable, the signing of a final peace agreement between the government and the FARC in November 2016 has opened up space for innovation in humanitarian demining, from the introduction of new methods (such as the use of demining rats) to new partnerships, such as that with Brazil, through which Brazilian Marines train Colombian personnel in demining. Most notably, Colombia has an unique military brigade dedicated to demining–the Brigada de Ingenieros de Desminado del Ejército, which works along a specialized Navy unit eight and around nine civilian demining organizations.  Although area that are still affected by conflict (including with the second largest Marxist guerrilla group, the Ejército de Liberación Nacional – ELN) are still off limits to humanitarian demining initiatives, these innovations can be considered a source of inspiration for incorporating humanitarian demining into peace processes in Colombia and beyond.

Adriana Erthal Abdenur is a fellow at Instituto Igarapé.