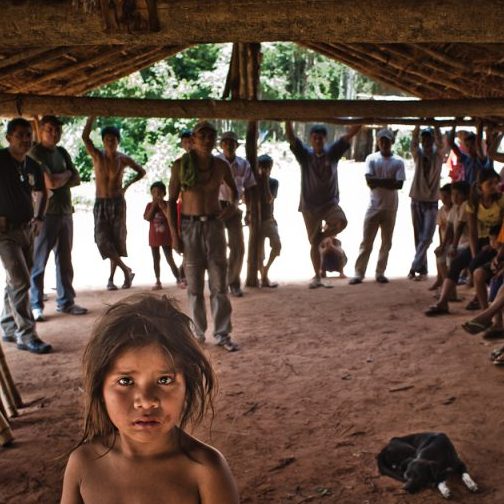 In Brazil, one person every minute is forced to leave their home

This week sees the Instituto Igarapé’s launch of its Forced Migration Monitor, bringing unprecedented research into the phenomenon of forced displacement in Brazil.

Refugees represent less than 0.005% of the Brazilian population, but another kind of migrant accounts for a much larger proportion: the internally displaced. Since 2000 at least 7.7 million people – 4% of Brazilians – had to leave their homes as a result of natural disasters, and development projects. The calculation is part of the Forced Migration Observatory (www.migracoes.igarape.org.br), which the Instituto Igarapé is launching today, 9 March. The institute is also releasing a publication (in Portuguese) with the full analysis of the data.

Efforts to date have focused on quantifying the number of refugees fleeing from armed conflicts around the world, and how many of them arrive in Brazil. This new data visualization tool created by the Instituto Igarapé focuses on structuring a quantitative metric that also takes into account internally displaced people.

“In recent years the country has become home to roughly 10,000 refugees of more than 80 nationalities and has granted thousands of humanitarian visas to migrants arriving from unstable countries. However, far less visible are the Brazilians forced to leave their homes due to natural disasters, systemic violence and development projects,” explains Maiara Folly, a researcher at Igarape Institute.

Visualization of data broken down by municipality

As well as the unprecedented survey results, generated by integrating different databases, the observatory provides a georeferenced and interactive visualisation of the distribution of internally displaced people in Brazil over time. The tool will be used for research and decision making regarding migrants, strengthening the rights of those affected by forced displacement.

R$ 800 million spent per month due to extreme weather conditions

Brazil experiences a higher incidence of natural disasters than commonly believed. Between January 2000 and December 2017 more than 6.4 million people were displaced due to floods, storms, landslides and other kinds of disasters: an average of 357,000 per displaced people per year. In addition to the the human cost – over 100,000 Brazilians have lost their lives in natural disasters since 2000 – these tragedies generate a monthly cost of R$800 million, according to the Centro de Estudos e Pesquisa sobre Desastres (Center for Research and Studies on Disasters). Nevertheless, prevention and impact mitigation strategies remain weak. In 2013, only 526 (9%) of Brazilian cities had established a municipal plan to reduce risks associated to natural disasters.

Another major cause of forced migration in Brazil are massive development and infrastructure projects. At least 1.2 million Brazilians have been forced to move due to such projects over the last 18 years. Since 2000 the construction of more than 80 dams, primarily those built for the installation of hydroelectric power plants, forced the displacement of between 130,000 and 230,000 people. Meanwhile, the construction works for the hosting of the 2014 World Cup and the 2016 Olympic Games forced another 47,000 Brazilians to abandon their homes.

“And, given the reluctance of public authorities and private companies to provide information about the negative impacts of their investments, these statistics could be just the tip of the iceberg,” warns Robert Muggah, Research Director of Igarapé.

Intensity of migration in Brazil between 2000 and 2017. In 2009, the year in which a inundation forced the displacement of around 350,000 people in the Northeast, a record number of internally displaced people was recorded

Leaving home due to violence: an unknown number

Violence is another factor that forces people to move. In 2016, Brazil registered more than 61,000 homicides, an average of 7 murders per hour. Criminal violence is frequently cited as one of the main reasons for people to migrate, including to other countries. Surprisingly, little is known about the number of people who are forced to move due to violent crime. Despite growing evidence that entire families are routinely evicted from their homes by the activities of gangs and militias, there is no comprehensive reporting on the topic.  Many of those who live in urban settings and are forced to flee obey the “law of silence”, fearing fearing retribution for speaking out.

A problem still awaiting a response

Despite the sheer scale of internal displacement due to natural disasters, development and violence, Brazil has yet to mount an effective response. There is still no public entity dedicated to monitoring forced migration, much less policies in place to provide protection and fair compensation for those displaced. Instead, institutional responsibility and associated resources are scattered across different ministries and departments.

For those who can afford it, often the only means of claiming fair compensation for having been forced to move is by appealing to the courts.

“Despite the high number of Brazilians displaced every year, the country still has no legal framework that guarantees the rights of these people. Brazil urgently needs to develop protection and assistance policies for those who find themselves forced to leave their homes, cities or states,” says Maiara.

Read the full analysis of the database: https://igarape.org.br/wp-content/uploads/2018/03/Migrantes-invis%C3%ADveis.pdf

Mesmerizing maps show the global flow of refugees over the last 15 years (Business Inside, May 2017)

Internal displacement hotspots: Navigate around the map and find out the causes and numbers of people forced from their homes, according to Instituto Igarapé data (O Globo)

About the Igarapé Institute

Instituto Igarapé is an independent think and do tank dedicated to the agendas of safety, justice and development. It is one of the leading Brazilian organizations engaged in the political themes of drugs, citizen safety and international cooperation. Its objective is to propose innovative solutions to complex social challenges by means of research, new technologies, influence on public policies and communication.