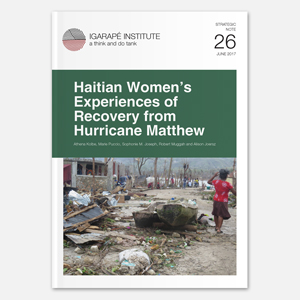 On 4 October 2016 Haiti was struck by a category five hurricane, the strongest such storm in over 50 years. Hundreds were killed and over 1.4 million made homeless. A household survey of 2,792 households was undertaken between 11-21 October 2016. Repeat surveys were taken with a selection of households in December 2016 and February 2017. The survey demonstrated that Haitians were severely affected by the storm, with more than 67% claiming to be made homeless or forced to temporarily relocate. The survey also underlined the importance of food security, particularly among female respondents. A worrying sign is that more than 50% of the respondents were not aware that the storm was coming and less than 6% evacuated beforehand. This assessment offers critical insight into the dynamics of emergency and the impacts of the aid effort.