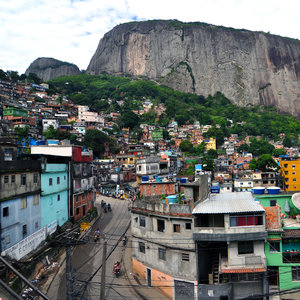 Designing out crime in the world’s fragile cities

In the third blog in the Cities, Violence and Order series, Robert Muggah considers the merits of ‘designing out’ urban crime in future cities, versus ‘deterring’ it.

While no one knows for sure, at least 600 informal settlements litter the hills and peripheral areas of Rio de Janeiro. The city’s 1.5 million poor live cheek to jowl with another 5 million middle and upper class residents. Notwithstanding ongoing efforts to ‘pacify’ hot spots in the 550-year old city, large swathes are still governed by drug traffickers. These groups control the distribution of cocaine along with most local services in their jurisdiction, including the dispensation of security and justice.

Whether affected by crime or conflict, cities are the anchors of civilizations throughout history. Many of them endure even as nation states rise and fall. Yet the sprawling cities of today are radically different from those of centuries past. The global turn to the city is profoundly transforming global governance and economic and social relations – arguably more so than in the pre-Westphalian era. Simply put, cities are where the twenty first century fight for security and development will be won or lost.

This epochal process of urbanisation is creating a new lexicon of urban scale. Geographers speak of super cities, mega cities, hyper-cities, megalopolis’, conurbations and more. We’ve never seen cities like this. About two thousand years ago, Rome, then the largest city in history, peaked at about 1 million before going into rapid decline. No other European city reached this threshold for another 1,800 years. The city that did was London.

Many of the world’s 28 mega cities have larger GDPs and budgets than most of the world’s countries. Networks of production and trade are also increasingly routed through the world’s urban nodes, with fast-growing cities exerting autonomy and control over taxation and revenue collection. Some are also beginning to use soft power to extend their influence.

The dark side of urbanisation

What is especially novel is the breathtaking pace of the urban explosion. In the mid-1800s, just 3 per cent of the world’s population resided in cities. Today it’s 50 per cent and this will expand to 75 per cent in the next thirty years. Although the city experiment is largely positive – people living in cities tend to live healthier and wealthier lives – the gains are not evenly distributed. There is a darker side to the unregulated turbo urbanisation occurring in Latin America, Africa and Asia, in particular.

The breakneck pace of city growth in Africa and Asia is generating new kinds of fragility within and outside of cities. These fragile cities echo many of the same anxieties associated with fragile and failed states. Cities like Dhaka, Karachi, Kinchasa and Lagos are 40 times larger today than in the 1950s. Some of them are exhibiting fissures in the social contract linking urban elites and city residents. They are often unable to secure a monopoly over legitimate violence or deliver basic services and hybrid systems emerge.

Fragile cities are confronted with complex forms of instability and hybrid and criminalised governance structures. They are already arenas of new kinds of stabilisation, pacification and social control – especially of the repressive variety. If future cities and slums are to thrive, they’ll need to become much smarter about managing the urban commons. This means building vertical, going green, and capitalising on appropriate technologies to make cities safer, healthier and more prosperous for all.

Deter or design out crime?

While a generalisation, there are at least two approaches emerging to address fragility in cities. The first focuses on ‘deterring’ crime. It typically entails expanding security measures and investing in defensive architecture. Common strategies include cameras, high walls, and gated communities. Meanwhile, the second approach involves ‘designing out’ crime. The goal is to create more open and inclusive spaces rather than privatising and barricading them.

This idea of designing out crime is not new – it’s been around for a few decades. It draws its inspiration from theories of crime prevention and environmental design, or CPTED. Proponents seek to integrate resilience to fragility into city planning rather than treating it as an add-on. There are exciting examples emerging from northern Europe, but also Cape Town, Medellin, and Mexico.

There are a few core principles associated with the design out crime approach. The first is to use existing space as a natural defense. Another is to incentivise low-rise apartments with large windows and gardens as well as glass fences to increase eyes on the street, or natural surveillance. Also important is creating safe spaces – both by avoiding dark alleys and dead-ends but also investing in parks and community goods.

A goal of city planning, then, is to increase people’s attachment to their city or slum. This is not easy – and requires a fair amount of consultation and participation from communities. In short, we re-think the city design. This means improving how people interact and move around in them. This is not ‘soft’ – far from it: crime rates have fallen dramatically in places where it is pursued with fidelity.

Back in Rio de Janeiro there are new efforts to design out crime. This includes widening streets, introducing lighting, upgrading housing, new mobility systems to link poorer and wealthier areas, and rethinking policing. It’s not perfect – far from it – but murder has dropped by 65 per cent since 2009. It is a radical departure from the past. As the rise of cities continues citi-zens need to avoid the temptation to barricade and fence ourselves themselves off. To the contrary. Safer cities need to be planned such that they are more open and inclusive.

Robert Muggah, Designing out crime in the world’s fragile cities